The cave with the reliefs an from the centre of Athens

by Exploring Greece TV
in ATTICA, East Attica
A A

Attica hides many secrets and locations that many may not know. Places and attractions you may have been so close but not aware of. Among them is a cave that because it is not visited, many ignore it. It is located in the north of Vari and is called Nympholiptos Cave.

The unknown cave is an hour away from Athens

The Cave of Nympholiptos, also known as Panos Cave and Cave of Archedimou, is a cave on the southern slopes of Ymittos in Attica,in the north of Vari. is located on the hill of kravati at an altitude of 260 meters, in the northern of Vari, on the southern slopes of Ymittos. It is about an hour from Vari but is more easily accessible from Voula and the road that continues after the cemetery.

It may be unknown to most people but it is a very important archaeological site. Inside it is decorated by the Theraeus sculptor, Archedimo, from 5th century BC. If one could visit it today, since it is not visitable, one would see the impressive anaglyph that adorn its interior. The cave in ancient times was sacred to the Nymphs, Apollo and Pana. Steps and anaglyph have been carved on its walls.

The main hall of the cave, with a length of 26, width 23 and height 10 meters, was the sanctuary and is divided by a wall of stalactites into two sections. Its opening, the dimensions of 5 by 2 meters, is almost vertical and on the rim they have carved stairs which today have been destroyed. 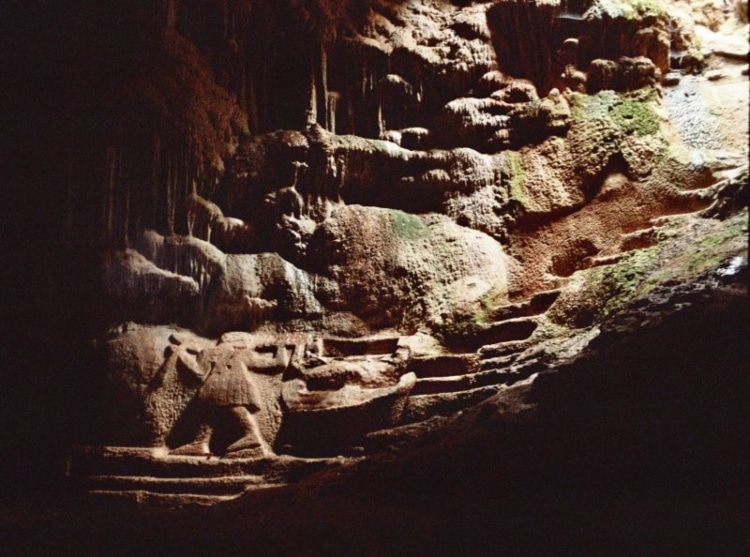 The first to visit the cave was the tour operator Richard Chandler in 1765 and since then it has been visited by other tour operators who passed through Attica. Among them was Lord Byron.

The image of the cave today

And in ancient times it may have been a popular worship area because of the rich vegetation, dense forest and springs that existed , but today it does not cause the same interest. This is because it is not visited, because a great deal of destruction was caused during the German occupation and was not restored. The cave itself has been looted for centuries by archaeologists.

Excavations were carried out in the cave from 1901-1902 by the American School of Classical Studies in Athens, led by Charles Weller. Hundreds of lamps and reliefs were discovered inside the cave, two of which are on display in the National Archaeological Museum’s Sculpture Collection.

Aegean Sea: The beach with the pine trees touching the sea

Paros: The magnificent temple and the legend with the 100 doors