The sandy beach that combines everything

If there are two things that make Cyprus stand out, these are its beaches and its wonderful gastronomy. For both the first and the second, there are dozens of options for fans of all kinds. As far as the beaches are concerned, whether you want something more organized or more relaxed, Cyprus offers everything you want to find even within walking distance of one another. Malama beach is one of those beaches that have stolen the hearts of its visitors and it is what its name implies Its calmness fascinates even the most demanding.

Malama Beach in Cyprus is… a malama (golden, platinum etc)

Malama beach is one of the most known both for its placidity and as a place for water sports. Its real name is Skoutarospiloi or Skoutaroi. However, it is best known as Malama, because of the hotel of the same name, located there. And yet it took its first name, Skoutarospilioi, because of the beautiful caves it has, which are even said to have been used as a refuge for buccaneers or other warriors.

It is a placid but at the same time organized beach. It is 70 meters long and only 12 meters wide. There are chaise longues and umbrellas in case you need them. You will reach it after passing the roundabout of Zorpas, about 200-300 meters after the first twist to the right of the road (opposite the Best Value supermarket). You’ll move on until you see the white and blue houses and get to the parking lot. That’s where you’ll find the mobile canteen.

The view it offers is also beyond words since, beyond the blue colour of the sea, many plants and trees blend harmoniously with it.

Tip: Don’t forget to take sea glasses with you to admire the seabed!

Malama Beach is between Paralimni and Famagusta. Paralimni is located in the southeast of Cyprus and is named after the seasonal lake that borders to its west. This area is a natural cavity where rainwater is collected from all parts of Paralimni and the neighbouring hills.

It has a rich cultural tradition and combines the advantages of the traditional village with the comforts of the modern city. 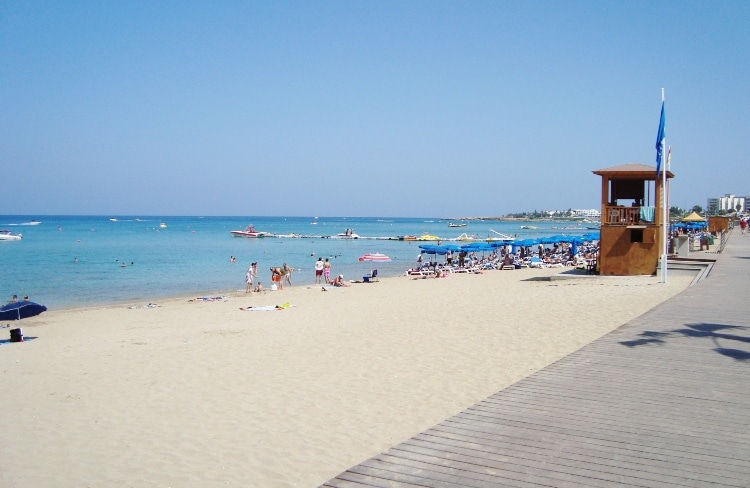 A modern road network connects Paralimni with the other regions of Cyprus and its visitors have the opportunity to travel easily throughout free Cyprus.

Protaras, the tourist area of Paralimni is a very popular tourist resort, for both local and foreign visitors. It is an ideal holiday resort and has about 20,000 hotel beds. A true paradise, full of life, with golden beaches and crystal clear and calm waters, combines luxurious hotels, a joyful atmosphere and a lively nightlife.

Cyprus: The beach with the palm trees that rivets you

Mylopotas: The petal-shaped beach with all the shades of blue

Kalopigado: The quiet beach of Attica with its clear waters