The legend behind the name of Foneas beach in the Peloponnese

Turquoise waters on a beach which looks like an island.

Greece is full of steep and impressive beaches where you can sometimes find it difficult to reach, but the result rewards you. Crystal clear, turquoise waters and sandy beaches are waiting for you to spend some of the most beautiful moments of your life. Some of these beaches stand out for their history but also for the myth that has been created around their name. One such beach is the beach of Foneas in the Peloponnese. We had been there many times but we did not know where its name came from and what was its story.

Foneas Beach: The myth around its name

The beach of Foneas is one of the most famous in West Mani and not unfairly despite the fact that it actually looks hidden. It is at the end of a trail, which is why we had a hard time finding it the first time. However, as soon as we spotted it and we got there we were left speechless It is a beautiful and crystal clear beach with pebbles that gives you endless moments with dives and relaxation. The landscape around is full of trees and rocks that create a special setting.

Many moments we thought we were on an island to a secluded Ionian beach. You’ll understand what we describe to you the moment you will get there. The most characteristic of the beach which has been photographed many times is the big rock that is located there. From the middle of the bay and further you’ll be able to see a lot of swimmers enjoying their dives.

Have in your mind that the beach is not organized and you probably can only find an open canteen to drink something. This means that you should have provided in order to have with you an umbrella, towels and everything else that you will probably need to enjoy your swimming. 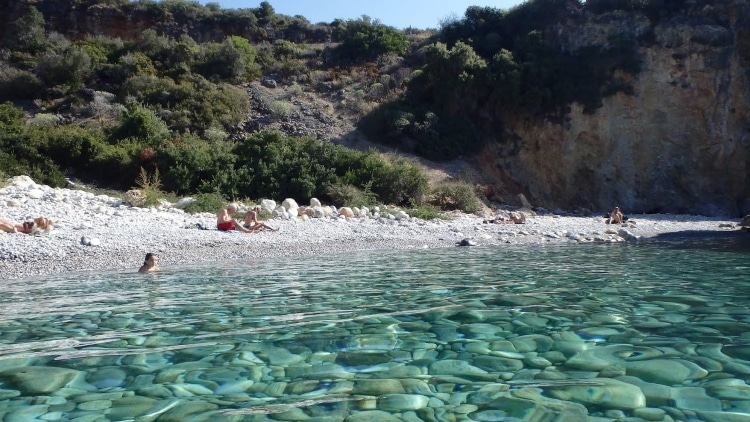 Foneas and the myth around its name

According to the name of the beach, there are various legends and versions. One of these legends that is considered the one which prevails is this: A pirate once shipwrecked on the beach and found refuge in its cave. Until he managed to repair his shipwreck, he killed passers-by to rob them, and so he remained in the local tradition as the “Foneas”(the killer).

How to get to the beach

Access is going to be difficult the first time you will get there. It is located very close to The Beach of Dolphinia just four kilometers southeast of Kardamili, on the way to Laconia. You’ll find it at the end of a path between the trees, and the first time you will want to get there you might need the GPS. In any case, to see exactly where It is, click HERE.