Athens Tower: The story behind the iconic building

Details of the construction of the tallest building in Greece

It is without a doubt one of the most famous buildings in the capital. The Athens Tower is one of the trademarks of the city that does not go unnoticed. The tallest building in Greece is located in Ambelokipoi district, on Mesogeion Avenue and of course it has its own special history.

The Athens Tower and its construction

At a time when the maximum height of a building in Athens could not exceed 35 meters, an inscription that read“ANEGERSIS URANOXYSTOY PYRGOS OF ATHENS” (ERECTION OF THE SKY-SCRAPER “TOWER OF ATHENS”)certainly caused sentation. this was the inscription that announced the construction of the Tower of Athens at the end of the 1960s. Up till then, the construction of such tall buildings was prohibited by the law.

Since 1968 the law on the height of the buildings ceased to apply and works began on the construction of the highest building in the city. Of course, this project even before its completion caused the intense interest of passers-by and the citizens of Athens. They were eagerly awaiting to see the country’s first skyscraper built. Up till then, after all, the tallest building in Athens was the 14-storey Hilton Athens. The hotel was inaugurated in 1963, when all the other buildings were six-storey apartment buildings. The Athens Tower was officially built on June 13, 1968 and the works lasted until 1971. The work was done by the company “Alvertis- Dimopoulos S.A.”, one of the biggest building companies of the time. They were responsible for the creation of many high-rise and standard buildings in Athens.

But this project was, unsurprisingly, the biggest advertisement at the time for the company. They wanted to seal their success and course of hteir company by building a skyscraper. And they made it.

The Towers story and details of it from that time 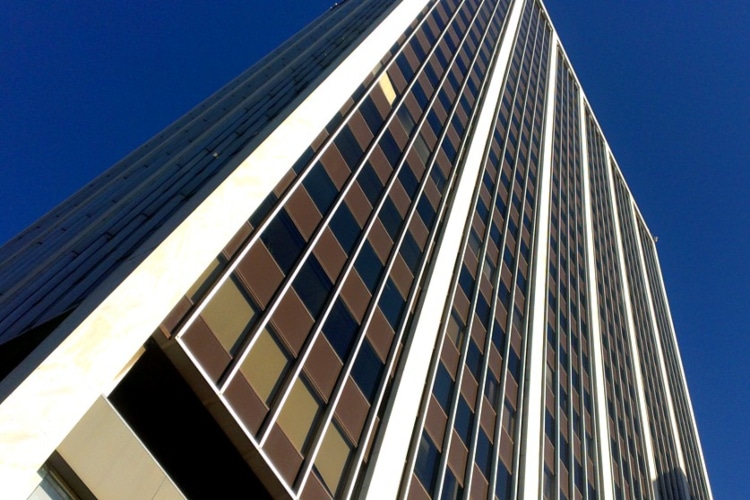 Observing the construction of the 28-storey building, you will see that the stairs are located in the center of the building and the offices around. A typical architectural structure of a skyscraper. The windows, of course, do not open but air is inducted to each floor from the outside. In addition to the 28 floors, the Athens Tower has a mezzanine, an attic, a ground floor and a facilities section.
Initially the construction company had considered entrusting the implementation of the project to foreign architects. It was eventually entrusted, however, to the Greek architects, Ioannis Kybritzis and Ioannis VikelasIoannis Vikelas was born in 1931 and had studied more than 800 buildings. Among the dozens of buildings he designed, were the Hotel President and the Ministry of Foreign Affairs. It took him just three years to complete the construction of the tallest building not only in Greece but also in the whole of Balkans.

The result was a huge glass construction with panoramic views across the basin of Attica. The opening of the building was the social event of Greece’s capital and was curried out by the Minister of Economic Affairs. Since its inauguration, the Tower has been discussed very much. There were not a few persons who said that the Athens Tower resembled the American Sigram building that was built in Manhattan in the 1950s. That building was 157 meters high and similar in shape to the Greek skyscraper. The building was the first Building in the Balkans to be constructed using the mixed construction method, i.e. with steel columns and reinforced concrete slabs. Even the strong earthquakes of 1981 and 1999 did not cause any problems in the Athens skyscraper. Another trailblazing of the building, was, in fact, the use of plasterboard which helped reduce its weight.

What was Athens called before it got its name today