Ithaca: On this beach, according to the legend is the place that Odysseus landed

A mythical place with unparalleled beauty

Ithaca is the island that fascinates you from the first moment and it is no coincidence that Odysseus… has been looking for his Ithaca for years. An island with unique beauty, turquoise beaches, and lush landscape. That’s where you’ll find your own Ithaca and you are going to have a great time no matter how many days you are going to stay. And you’ll find places where history gets mixed with myth and in many cases, it creates a mystery. Such a place is the beach in Ithaca where according to the legend Odysseus has been landed. It’s the beach Dexia or Dexa A dreamily beach.

Ithaca, the beach on which Odysseus landed

The beach Dexis or Dexa is a quiet and beautiful sandy beach that will thrill you. It is very close to Vathi, you can even go on foot to get there. It has a small uphill but ..don’t worry A bottle of water and a hat and you’re ready to go. Besides, the view there will excite you and probably you will forget this short route right away. You will enjoy swimming.

Just like we did. We enjoyed swimming in calm and shallow waters with unique views. From there you will admire the small and unknown island of Skartsoubonisi which belongs to Ithaca. It is considered one of the most beautiful beaches of Ithaca and not unfairly. and we believe it too.

It was named Dexia or Dexa because of its location it is just at the right side of the port in Vathi.

Apart from its beauty, the beach according to the legend is the place that Odysseus landed when he returned to Ithaca. The legend states that it was the place where Odysseus felt the first feelings of repatriation to his beloved island. His Ithaca. 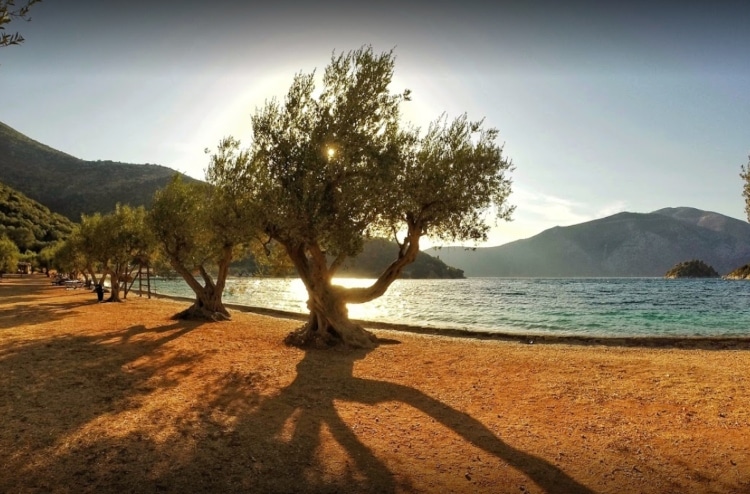 Useful information about the beach

Tip 1: The Dexa is not a sandy beach and has enough pebbles. So it’s a good idea to go there in special shoes.

Tip 2: Take as many supplies as you need because probably you will like it so much that you’ll want to stay until the night.

The beaches of the Corinthian Sea for great swimming experiences.

Mikro Pelion: The hidden and blue beach in Attica