The 7 prettiest parks in Athens

by Χάρης Κατσίγιαννης
in ATHENS, GREECE, Tourist in my own city
A A
Share on FacebookShare on Twittershare

Many may consider our capital a city full of exhaust fumes, but Athens has many parks, which, besides being green lungs for the city, are good for a visit if you want to get away from the fast pace of the everyday life.

One of the parks to visit is Atticon Alsos (Attika Grove), which is an urban forest area. It is considered a green area of recreation, with great ecological value for the Attica Basin.

Its tract extends to a 550 acres area on the hill of Turkovounia. It borders the areas of the Municipality of Athens, Galatsi and Nea Philothei districts. It consists of hills with rocky slopes and cliffs, as well as a cave. There, your eyes can rest, daydreaming and looking at the green clumps of cypresses, pines and many other species of trees.

When you visit the Attica Grove you will find an outdoor theatre, a canteen, an outdoor cinema, refreshments, a playground, volleyball, basketball and tennis courts, changing rooms and outdoor parking space.

Access to the interior is simple and familiar to its guests. This gives the opportunity to those who choose it as a getaway, to find their way easily. Its spaces are also places for rest and walking of the elderly, but also a possible choice for school excursions. It is the largest garden in the centre of Athens which coexists harmoniously with art and nature. The Pedion tou Areos has an area of 230 acres and is one of the most important parks of Athens, as well as one of the largest lungs of greenery, similar to that of the National Garden.

It was designed in 1934 to honour the heroes of the Revolution of 1821, so you will notice that it is decorated with busts of heroes along the main path of the park. At its entrance, which is located at the junction of Alexandra’s Avenue with Mavrommataion Street, there is the statue of King Constantine I on horseback. On the side of Alexandra’s Avenue stands the statue of the Goddess Athena on a high pedestal.

When you walk and observe the interior of the park you will meet two Christian temples, three playgrounds, the building of the theatre “Alsos” and the open amphitheatre “Aliki”. The amphitheatre is also used for performances or concerts.

Also, in the wider area of the park, there is one of the most historic refreshment bars in Athens the “Green Park”. There is also the natural continuation of the Pedion tou Areos which is the Protomagias Square on Mustoxydis Street with an area of 25 acres. The refreshment bar “Delear” is there and in the surrounding area, there is a building with WC. 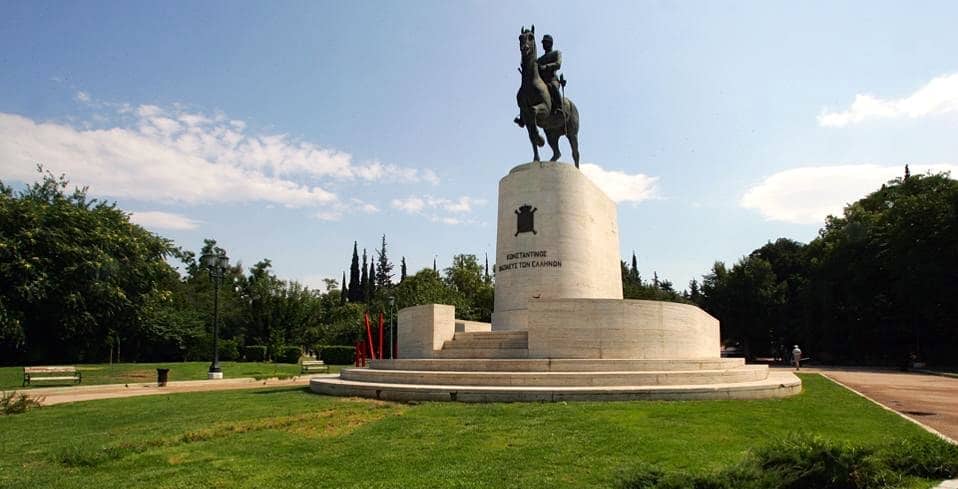 The National Garden has an area of 158 acres and is located in the heart of Athens. If the adjacent garden of Zappeion is added to its total area, then we have a large flower bed of 288 acres in the area. It is the first park created in modern Greece and the first garden of the Greek capital. It has features of other European parks and consists of excellent garden configurations, dirt paths and a well-thought-out connection to the city. It is located in the same place where, during antiquity times, was the sacred grove of Lyceum which was dedicated to the god Apollo.

If you go to the northwest side, you will see the well-known Greek Parliament and the Monument of the Unknown Soldier.

The visitor can admire hundreds of species of trees, plants, many species of birds, lakes, various buildings such as the Children’s Library, the Botanical Collection Building, the traditional café. Archaeological remains such as the mosaic of a Roman mansion and scattered marble architectural pieces. A sundial, decorative elements (pergolas, lakes), busts like Aristotle Valaoritis, I. Kapodistrias, D. Solomos. Finally, the visitor can browse the area with the collection of animals and birds. 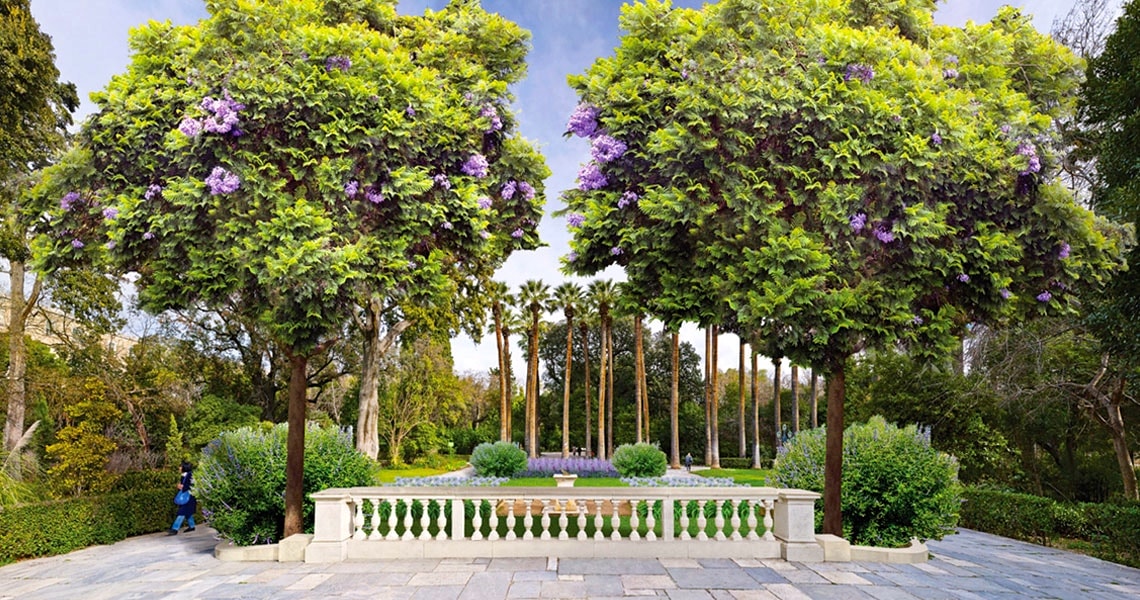 The former Royal Tatoi Estate is open to the public from sunrise to sunset. Regular guided tours are planned on weekends in order to inform citizens about the history of the Estate and its enormous environmental importance.

An excellent route is the one to the artificial lake Guitar which has an excellent view of the Basin and is of rare natural beauty.
On the estate, there are many open spaces where you can enjoy your picnic. Be careful with any garbage you may have and use one of the trash cans that exist in several parts of the estate.

For equestrian enthusiasts, the Tatoi Estate is an ideal destination. Also, keep in mind that all kinds of motor vehicles are prohibited in the historical core of the estate. On the Estate there is a police station and 24-hour guarding of the site. It is strictly forbidden for the public to enter the buildings. Everyone should also be very careful about where they park their cars. 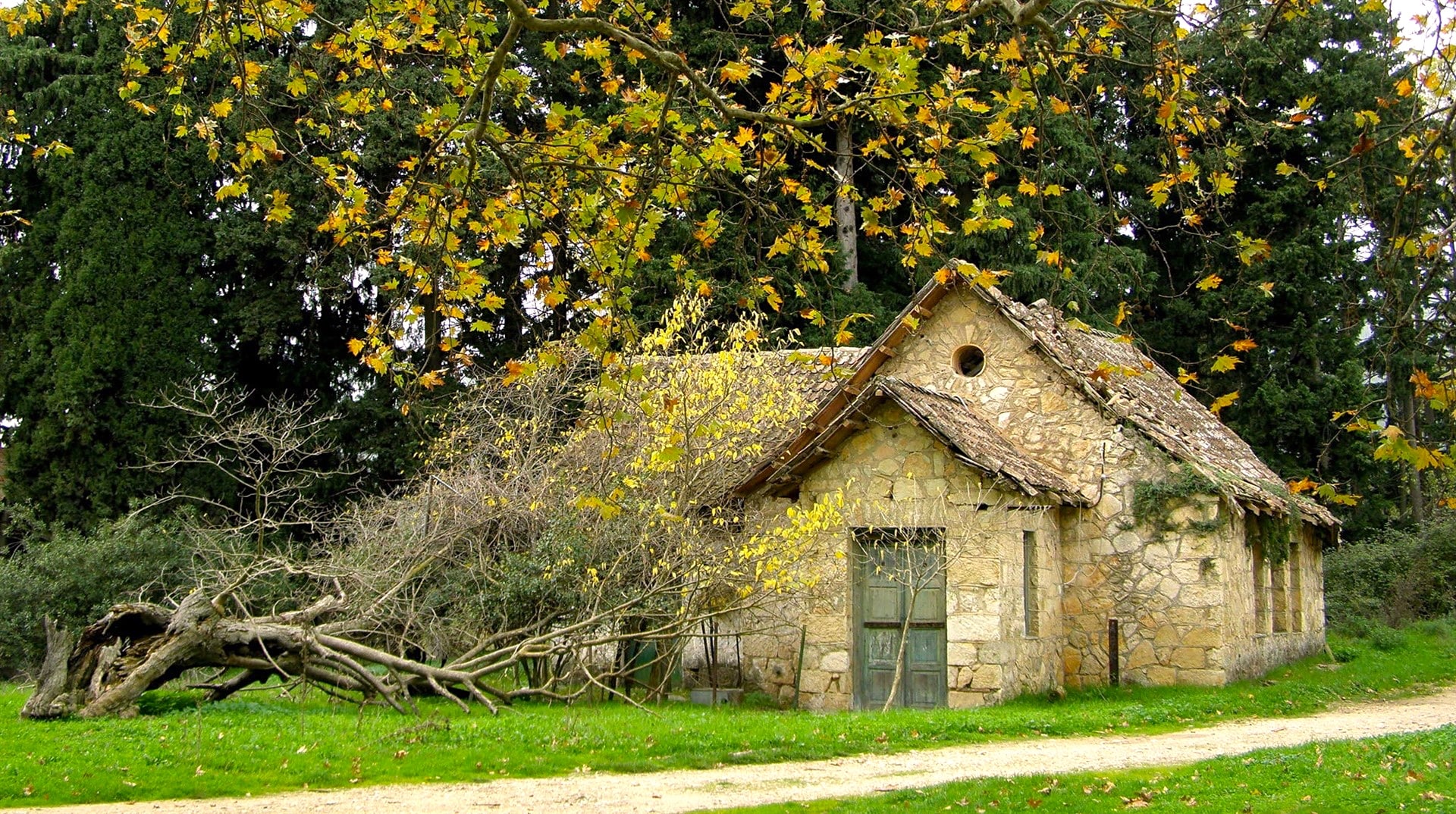 Syngrou Estate is also known as Syngros Grove. It extends to an area of 950 acres on the border of the Municipalities of Kifissia, Amarousion and Melisia. The main entrance is located on Kifisias Avenue, at the height of the KAT hospital, which makes it easy to access it either by vehicle or by mass transport.

For the most part, about 700 acres, it is covered by Syngros Forest, one of the most beautiful parks and the last natural forests of Attica. It’s the only one in the basin. Its flora mainly includes pine and several other tree species such as pine nuts, cypresses and other plants.

Of the remaining 250 acres of the Estate, most are terraformed for agricultural use, while a significant area is occupied by the premises of the Institute of Agricultural Sciences, the National School of Anavryta, the preserved mansion of Andreas Syngros, as well as the also preserved church of Agios Andreas. The latter is the only Gothic Orthodox church in Greece and its renovation was completed in 2007. 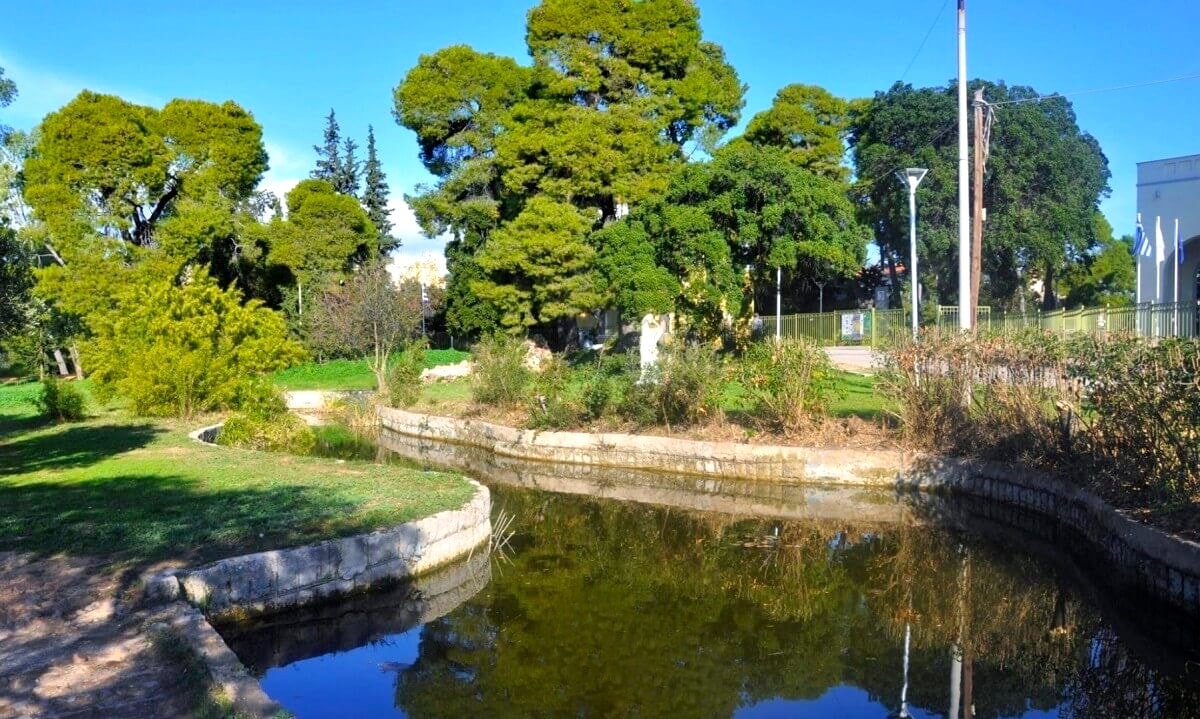 Part of the space reserved for the Metropolitan Park in Goudi belongs to the Municipality of Zografos. It is a verdant area of 49 acres. In the past, it hosted the military camp “Goudi”. Today it has been developed into an organized recreation and sports area, making it an important outlet for the residents of the area.

From the main entrance begins the main corridor of the park which branches into individual pedestrian streets and paths. The main connecting element of the composition is the particularly impressive water route in the form of a small river that springs as a waterfall from the location of the playground and ends at the northern part, at the height of the preserved building, a total length of 300 meters.

Along the water route, there are also two wooden access bridges. The plant composition changes the form between low and high rise greenery that, in combination with open turf surfaces, creates open spaces and visual views. Along the corridors, you will find benches, fountains and signage. In the corridors of the park, there is electric lighting for the safe movement of visitors. 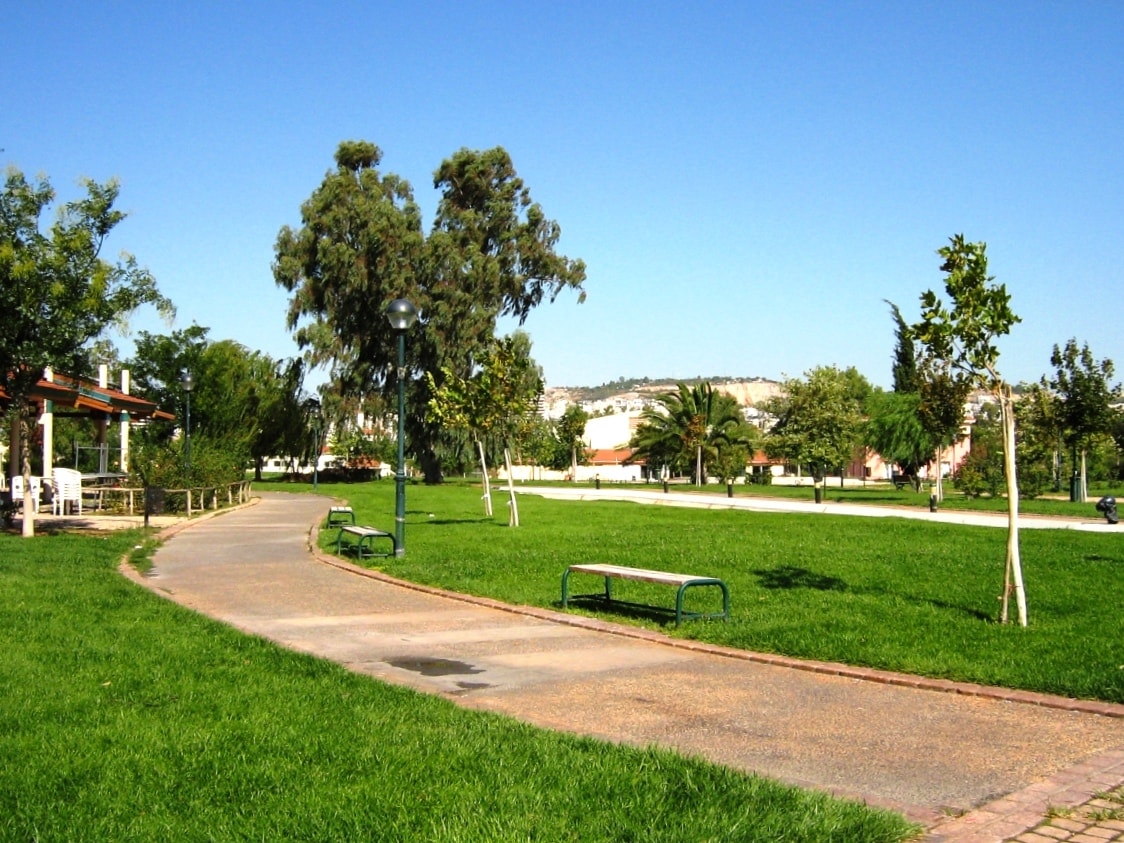 Of the 1,889 acres that are out of the city plan, about 224 acres belong to the Galatsi Sports Center. It has been formed to a green area and is located in the northern part of the Tourkovounia hill. It borders to the north with the Municipality of N. Ionia and the settlement of Kalogreza, and southeast with the ridge of the Tourkovounia hill. In addition, it borders to the Municipalities of Philothei and Paleo Psychiko and finally, in the west, with the Avenue of Omorfoklisia.

The grove is fenced, with grass, trees and gazebos, lacy streets ideal for cycling, a playground, basketball and football courts. It’s a very nice green space where you can comfortably take a walk, and have a coffee. It also includes a small outdoor theatre, an open swimming pool, tennis courts, an indoor gym, and an outdoor cinema. The grove is guarded 24 hours a day, while guards, trainers, doctors, nurses, gardeners and cleaning staff are employed on its premises.

Thus it is an attraction for many Athenians on weekends. Whichever of the above parks you choose for an excursion, picnic, morning exercise, game or a simple walk for relaxation, we are sure you will enjoy it!

Salamina: the monuments and lighthouse (Ep.2)