A female Olympus rises on this island

The village... where women are the ...bosses

When you hear the word Olympus, surely your mind goes to the famous mountain of the gods and it makes perfect sense. But how about you know another version of Olympus, even female? And not only that, but this version to be on an island and indeed of the Aegean. We are talking about the village of Olympus, Exactly the village Olympus which is located in Karpathos. It is the jewel of the island that catches the eyes of visitors.

The traditional Olympus on the island of Karpathos

Olympus is, therefore, a traditional village that measures five centuries of life in Karpathos. Olympus is amphitheatrically built offering a unique view of the Aegean Sea and the rest of the island. It is the village that if you visit it on your holidays, you will gain such peace that you will want to extend your stay.

The only thing it has in common with Mount Olympus is that it is also mountainous even though on an island. It is even the northern and most mountainous village on the island. Karpathos can be proud of the picturesqueness and the view offered by beautiful Olympus.

What also stands out in Olympus is the linguistic idiom which refers you to the ancient Greek language. This combined with the preservation of customs and the traditional costumes used in events by women make Olympus stand out in our time. Not only in Karpathos but also throughout Greece.

This village is the jewel of Karpathos and has managed to keep the picturesqueness free from any tourist traffic. Which of course happens to a large extent all over Karpathos. It is a pure destination of the Dodecanese that is still unexplored.

The village… where women are the …bosses 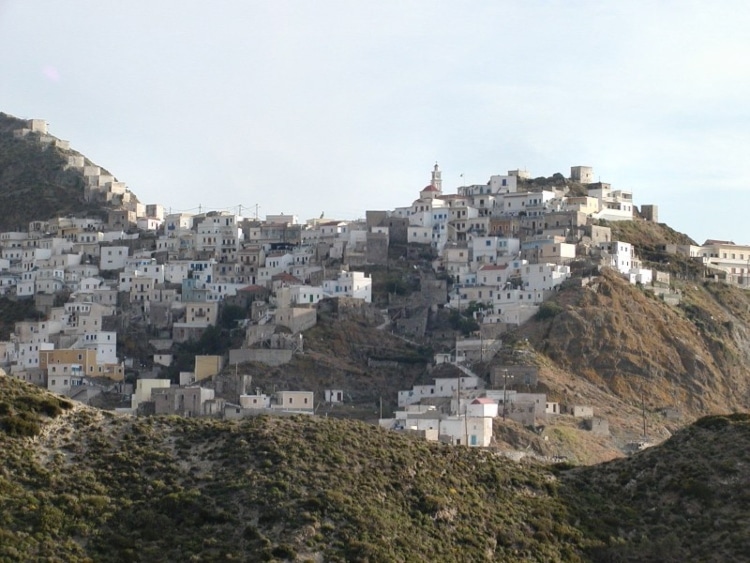 Olympus is a… female village with all the meaning of the word. That’s because there’s been a rumor for years that women have the upper hand there. A CNN reporter had even reported on this village and did find out how important the female opinion plays in the village and how powerful their role is.

If you take the plane from Athens, you’ll be in Karpathos in just an hour. And yet you’ll feel like you’re in another world. Sea, peace, tradition. All this in a unique combination that fascinates you. It’s not the island where you’ll live on secular nights, but it’s the island where you’ll meet authentic people. You will taste nice flavors, swim in beautiful beaches and experience another culture more traditional.

And don’t forget that’s where you’re going to meet your… female version of Olympus located on an island!

Skyros: Trip to the island with rare horses

This Greek village is actually Kolopetinitsa

Athens: The village that sank to solve the water supply problem

Swim at Agios Petros beach overlooking the Temple of Poseidon

Chiona and Grandes: An exotic and unexplored corner of Greece

Kyriakoulou: funny name for a secluded beach on Kythera