The ideal island if you want a holiday without crowds

Each Greek island has its own unique and special history. Some of them are known for the myths and facts that refer to their creation. And I’m sure Anafi is one of them.. This is because it is considered to be the Greek island created by the arrow of Apollo. It is one of the most beautiful and untouched islands of the Cyclades which gives you a completely different experience compared to what you are used to and have lived so far. The Greek summer will be unforgettable there.

What does the myth say about the Greek island made by the arrow of Apollo?

According to the legend, Anafi came out suddenly through the sea. It’s like it popped up when an event occurred that endangered the Argonauts (a band of heroes in Greek mythology). The island, therefore, was created to be, according to mythology, the refuge of the storm-tossed Argonauts, when they were returning from Kolchida.

So when they crossed the Cretan Sea in order to cross the Aegean Sea, they fell into a very long bad storm. The rough sea, strong winds, and the difficulties certainly led Argo(the ship) to destruction.

At that moment Jason (the leader of the Argonauts), while he raised his hands to the sky and begged Apollo to save them. That’s what happened. According to legend, Apollo threw an arrow in front of them and through a strong light began to emerge a small island. There the Argonauts took refuge. This is Anafi Island. And it’s called so because it basically emerged in the sea. Since then the god Apollo was worshipped as Anaphaeus or Aeglitis.

If you want a peaceful vacation and away from the crowds, then Anafi is what you’re looking for. There you will find pristine beaches, golden beaches, hiking trails, a graphical Town and as much peace as you want to relax and spend some peaceful days. There you will find an interesting nightlife and nice beach bars. But also you will have the opportunity to enjoy the pure version of the Cyclades. Humble and peaceful it wins the impressions with its graphical Town that stands out in the Aegean Sea. It is built amphitheatrically in the ruins of a Venetian castle and impresses from the first minute anyone who is there.

In the sights of Town stand out the picturesque windmills but also the many small churches, which are scattered in the settlement. It’s hard to distinguish them from the houses. They’re so simple and graphic.

What it also stands out for and for which it is called the Gibraltar of the Aegean Sea is an attraction on the southeastern edge of Anafi. It is a huge rock, which is the second tallest monolith in Europe after the one in Gibraltar. You will be shocked by its appearance. Tip: Don’t miss, of course, the chance to swim in Klisidi beach. It is one of the most shocking beaches of the island which are unique 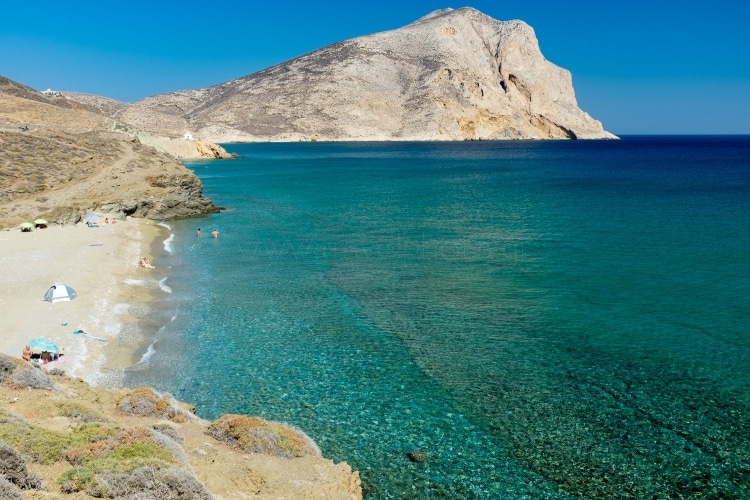 Klisidi is the sandy beach that attracts most of the visitors and not unfairly as it is a golden beach with crystal clear waters.

Five summer destinations you only drive