Although it has changed its name three decades ago, everyone's been naming it as it has been called for the last 130 years.

What do the three brass forms symbolize in the centre of Klafthmonos Square?

There’s no Athenian who hasn’t walked through it. It’s hard not to have done so and so does every visitor, looking up at the buildings that surround it. Klafthmonos Square is located in the heart of Athens and has been a passage of millions of people for many years.

One of the neoclassical buildings of the time, in Klafthmonos Square, was the first palace of King Otto and Queen Amalia. Today the Museum of the City of Athens is in this place. Thousands of cars go up from Stadiou avenue every day, having the statue with the three brass forms on their right hand. It is the monument of National Reconciliation, the work of the painter and sculptor Vasilis Doropoulos.

The original proposal for the name of the square was made by the architect who submitted plans for the city of Athens. King Otto invited Leo von Klenke and he christened it “Aeschylus Square”. The name was changed to “Mint Square”. Quite simply because the Mint building was there. It was then renamed to “March 25th Square” and “Republic Square”.

Meet the Museum of the City of Athens

In 1878, the square changed its name again. It’s called Klafthmonos Square now. Its “godfather” was the writer, historian, poet and later academic, Dimitrios Kambouroglou. In those years, the Public Services took their first steps and permanence of position was not offered along with the job. In the square, in a building that has been demolished, there was the Ministry of Finance. With every change of government, the former employees were fired and the new ones took their place. In this square, the poor employees gathered and cried.

The statue of reconciliation 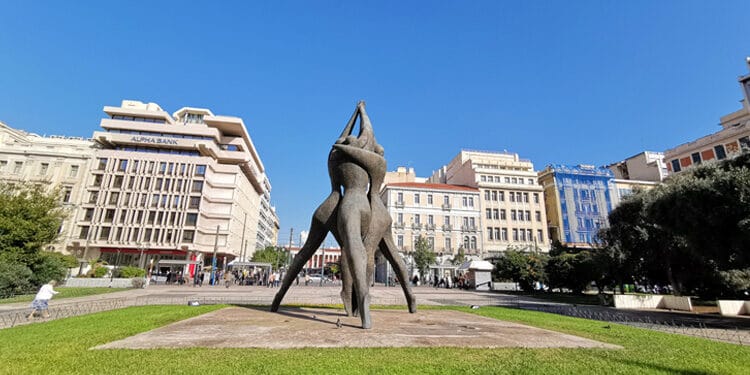 Its name, Klafthmonos Square (“klafthmos” in Greek means “crying”0, was given to it after a vignette by D. Kambouroglou in the newspaper Estia. And it means the square of crying. In 1989, the square changed its name again. In June of that year, it was renamed “National Reconciliation Square”. Then there was the unveiling of the statue of Vasilis Doropoulos that exists to this day.

Of course today, no one calls it “National Reconciliation Square”. Klafthmonos Square resisted the last change of its name. It stood-up resisting the change, just like the 8-feet figures in its centre.