The Athens neighborhood that escaped erasure and is now a gem

The islander aura of a district with a long history

Athens and its neighborhoods have usually beautiful and special stories following them. Many of them travel through the third century of their lives and in some places it looks like not a day has passed. As if the modern era had not been able to alter their form. This is the case with one of the most beautiful neighborhoods of Athens, called Anafiotika. The district that escaped the consideration and is today like an island.

Anafiotika and its history

This picturesque world was created in the 1860s. What many people ignore is that it was illegal for many years as, since antiquity it was forbidden to build anything there. Today, of course, it is reminiscent of the architecture of an Aegean island. But how did we get to today? And how is it possible that in an area that building was completely forbidden, now one of the most picturesque places in Athens exists?

Let’s start over. It was in the 1830s when Athens became the capital of the newly established Greek state. The development of the city was coming slowly and the urban plan made the center change shape gradually. For this purpose, in fact, the best builders from all over Greece were recruited. Together with Epirus, the islanders and in particular the inhabitants of Anafi had a good reputation, because they were trained to build their own stone houses on the rocks of their island.

So when some projects were finished, at some point, some of these workers wanted to stay in Athens. On the one hand they liked the city, on the other hand they considered it a good professional opportunity to stay in order to work in other projects. But there was a problem. The legal plots were very expensive for them and money was required that they could not appropriate. The only solution was the out of plan plots. And where would be a better place than next to the Acropolis? Thus, in 1860, two workers built the first houses in today’s area which is Anafiotika. History, in fact, says that the two masters, who came from Anafi, were building during the night in order to go unnoticed from the authorities. Due to the political and social turmoil of that period, the builders, who worked very quickly, were not noticed until they completed their work. 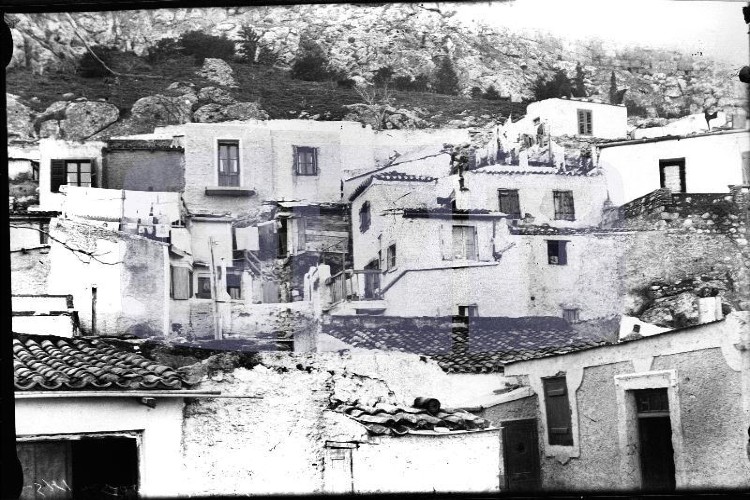 Soon the two masters from Anafi were copied from other fellow citizens and the houses began to multiply until an entire district was created. The Anafiotika! The district was surrounded by two churches that were recreated by the residents. Agios Georgios, located in the east and Agios Simeon in the west. The authorities, of course, had now noticed the illegal district, but Otto turned a blind eye. He was very pleased with the Anafian workers and wanted to keep them in Athens for the reconstruction.

The composition of the Anafiotika changed after the Asia Minor disaster and the arrival of the refugees. The first reactions to the illegality of the settlement came at the end of the 19th century Then the authorities tried to evacuate the inhabitants, on the pretext that the habitation in Anafiotika was dangerous due to the possible fall of rocks from the Acropolis. But the Anafians asked for huge compensations, which were impossible for the state to cover, and so their move to another area was canceled. So did any other plans for the construction of other houses in the area.Although there was the pretext of falling rocks. 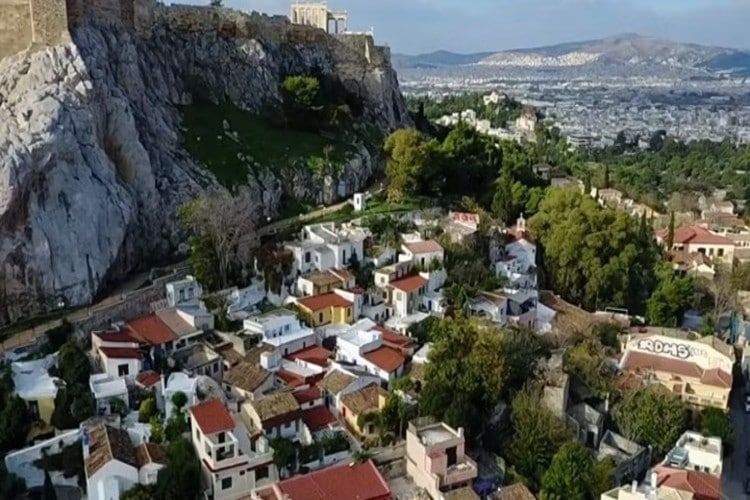 The district was considered to aesthetically alter the north side of the Acropolis and recommendations were made to tourists to enjoy the Parthenon from the hill of Philopappou. The same thing happened in the early 1900s when the then mayor of Athens Spyros Merkouris, tried to demolish the houses of the district in order to bring to the light the archaeological treasures, which he believed were buried under their foundations. The Municipality could not compensate the residents and Anafiotika was left intact again. Finally, a part of the settlement was demolished in 1950 due to excavations.

Another demolition during the dictatorship era followed with a decision on forced expropriation. However, Anafiotika managed to escape the barrage attcks from those who wanted to take their houses and build modern ones, something that changed dozens of areas in Athens and Attica to the worse in just a few years time. 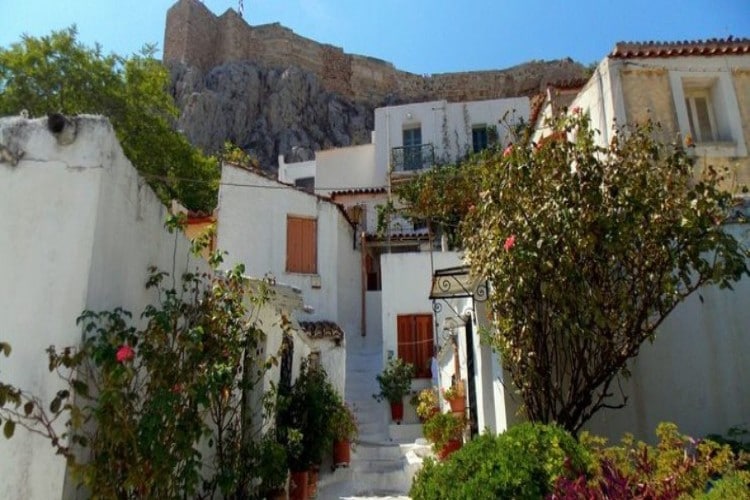 The settlement is now preserved, it is famous and multi-photographed. There are about 45 houses outside of which you can pass by walking. And you must think you’re on an Island in the Aegean. The narrow streets, the white small houses with the bougainvillea and geraniums give special color to the area. What the older ones considered a “poor shack” is today a romantic spot in the heart of Athens.