What is Theodoros Kolokotronis pointing at, and what’s curious about the stance of his horse?

If you have passed through Stadiou avenue, in the centre of Athens, you surely have noticed the impressive statue of the hero of the Greek Revolution. Theodoros Kolokotronis is there. Imposing. It dominates the homonymous square and is one of the most important works of Greek sculpture. He is even the first statue of a mounted man in Modern Greek sculpture.

In 1884, the residents of Nafplion (the first capital of Greece after the liberation of Greece from the Ottoman Empire raised a sum for the creation of a statue. After the notice for a competition, they assigned the construction of the statue to the great sculptor Lazaros Sochos. After doing the necessary research, Sochos decided to depict the hero in his original form. However, due to protestations, he was finally forced, to depict Theodoros Kolokotronis wearing a helmet.

He sculpted a masterful and detailed rendering of the Hero in the statue. Watch closely for every detail of the horse and rider ratiosHe even studied the faces of the living relatives of the hero and used a cast taken from the corpse of Kolokotronis. He created a statue that is iconic and symbolic at the same time. Characteristic is that the manikin was sculpted between 1891-1895 in Paris and was awarded before it even reached Greece.

Where does Theodoros Kolokotronis look? 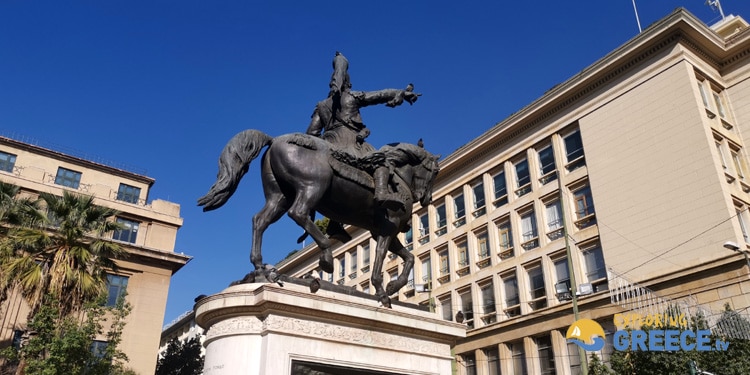 Theodoros Kolokotronis is attributed by Lazaros Sohos riding a male horse with his head facing to the left. Also, with his left hand, he holds the reins. However, his right hand is outstretched and his index finger points forward. But is there a specific direction Kolokotronis’ hand is pointing at? According to an urban legend it is considered that the index finger of his right-hand points towards Istanbul (Constantinople). However, the statue has been moved from the original location in which it was intended to be erected. So this change of location has disoriented the researchers, who speculate. 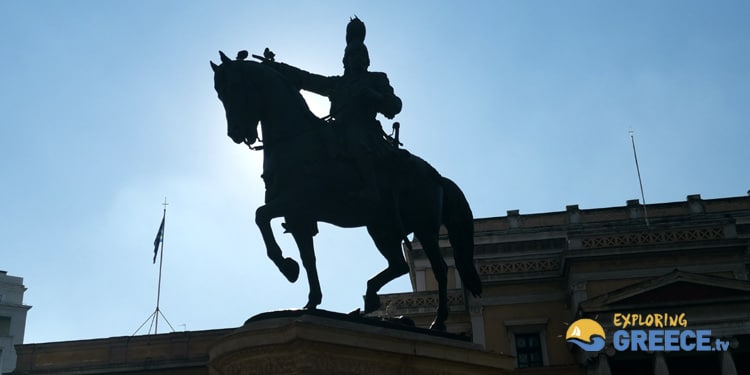 There has also been plenty of discussion about the stance of the statue’s horse. The choice of Sochos to represent Kolokotronis on horseback was a specific and deliberate choice. Horse riding was a daily habit for Theodoros Kolokotronis. It was a key element for fast transportation and surprise attack.

What is strange for many people is its stance. The reason? Because it has one of its two front legs in the air. In the international symbolic language of sculpture, this has a specific interpretation. It means that the mounted man died from injuries sustained during the fight. However, it is known that Kolokotronis did not die due to combat wounds. He died of a stroke the banquet thas was given for the wedding of his young son Constantine. It is assumed that the reason why the horse has such a stance, is due to the desire to pay an eternal tribute to the hero

Moreover, on the front of the pedestal, an inscription is carved: “Ride on, oh Brave General, on the back of your horse, teaching the nations through the centuries, as to how slaves can become free men.”Theodoros Kolokotronis is still gazing at the Athenians to this day.

Rizoupolis: The business story behind its name