Ermou: this street was made for walkin’

by Exploring Greece TV
in ATHENS, Life in Athens, Tourist in my own city
A A

Which if it is the most commercial street in Athens and also one of the busiest in Europe? The plan for the pedestrianization of Ermou street and its and implementation were not one of the easiest projects ever taken.

Discussions about the pedestrianization of the street began in the 1980s and the final decision was taken several years later. The works began in April of 1995 and the official inauguration took place at the end of 1997.

The story of Ermou street. Ermou Street is one of the first streets designed in the modern city of Athens. When the first urban plans of Athens were drafted, in 1833, the architects Kleanthis and Saubert included it as one of the main axes of the city. And its name was, of course, not accidental. From its design, it was already intended to be a shopping street of the centre of Athens. This is why it derived its name from Hermes, the messenger of the gods and protector of commerce.

Reactions to the pedestrianization

Ermou has always been an integral part of the commercial triangle of the old town of Athens. It was and is the main channel of communication between Syntagma Square and Monastiraki District. That is where the focus of commerce was always pointed. Greek clothing, textiles and footwear companies were developed there.

Thus, when in 1995 its pedestrianization is officially decided, there were many protests. All this, despite the fact that for many years the road had been, in a way, degraded. Many traders and shopkeepers thought this would be the beginning of the end for their jobs. And their main protestation had nothing to do with the nature of the project. It had to do with practical issues that, they thought, would never be resolved. They felt that the damage to their stores would be greater than the profit they could ever gain.

Concerns and protests were also expressed by the Athens Trade Association. Many shopkeepers argued that the works would hinder the movement of the purchasers. They considered that the shop windows would be inaccessible and thus would decrease customers’ contact with their products. Another serious problem that had been discussed a lot was the supply of goods. The majority of traders admitted that this would be significantly more difficult.

All this was be added at the time that the works started. The pedestrianization project was planned almost at the beginning of the discount period. Despite the reassuring statements of the then Minister Costas Laliotis and the mayor of Athens Dimitris Avramopoulos, the objections and tensions did not stop. The points mentioned in an informative brochure made by the Ministry of the Environment and Public Works were distinctive.

“This is a “radical” and “brave” solution, that is part of the modern concept promoting the restriction of car use in the city.” Finally, after a series of negotiations with the businessmen of the region, and the ATCS (Athens Taxi Car Syndicate), the experimental application of the measure began. Traffic was cancelled in Ermou street and in a part of Karagiorgi Servias street.

The study was planned and implemented by the Directorate of Special Projects for the Upgrading of Areas of the Ministry of the Environment and Public Works. It included two phases. The first concerned the part of the road from Syntagma Square to Aeolou street and the back-streets. The study was approved in its entirety, except for the section concerning the shaping of the site of the temple of Kaplikarea. The revision study for this section was approved in 1997.

The second phase of the study involved the formation of the sides in Syntagma Square and the pedestrianization of the remaining cross-streets.

The inauguration and rise of Ermou street. 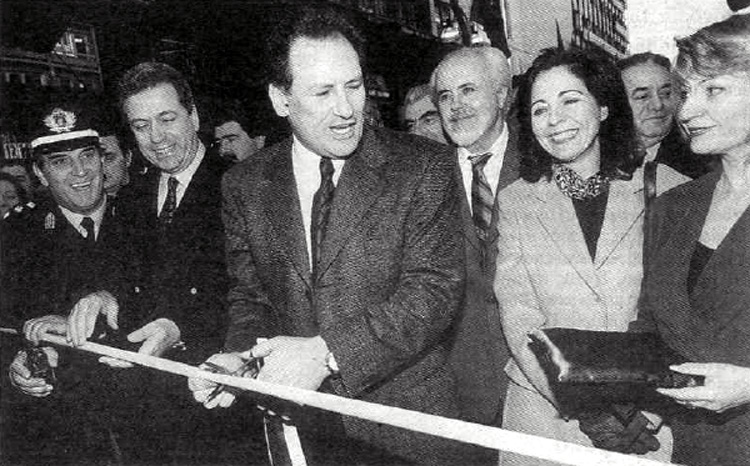 The period of implementation of the pedestrianization was not an easy one. Several delays, postponements and program changes caused much discontent. According to a survey conducted, at the same time, by the Athens Trade Association in cooperation with the Chamber of Commerce and Industry, the wholesalers of the Triangle declared themselves unhappy at a 97% rate. At the same time, retailers reported a negative attitude towards the project at a 50% rate. Finally, despite the reactions and the widespread discontent, the official inauguration of the new pedestrian street took place, a little before the end of 1997. It had already been two and a half years since works had started.

On December 30, of 1997, the red ribbon was cut and a new era for Ermou began. An era that a lot of people would not imagine of. “The largest pedestrianization ever in Greece” had been completed according to the Ministry of the Environment and Public Works. Shopkeepers found out that, instead of problems and withering, this work had literally changed the advance of their stores. The project, which cost a total of 2.2 billion drachmas, began to bring smiles and optimism.

The gifts for the traffic warden: A custom from the Old Athens

Store profits have increased dramatically. Crowds of people gathered every day and the shops entered a new era. The most commercial street in Athens was a fact. Other intervention projects were also completed although with several delays. Other roads were pedestrianized as well, trees were planted and fountains were made. The increase in profit of the shopkeepers reflected the new climate that prevailed. At the same time, another change had taken place, one that may not have been expected. Traditionally the location of a shop in Ermou Street was also linked to the prices of its products. For example, in the Syntagma Square area, prices targeted to those of highest income. Moving down the road towards Monastiraki, however, prices were declining. In 1999 already, as a direct effect of the industrialization, prices throughout the region were almost homogenized.

In addition to the aesthetic upgrade of the area, the circulation entrained another increase. And it is none other than the price of rentals. The rise brought with it an increase in the value of business premises. The rental price for a shop in the centre of Ermou street began gradually rising, thus depicting the common commercial trend. 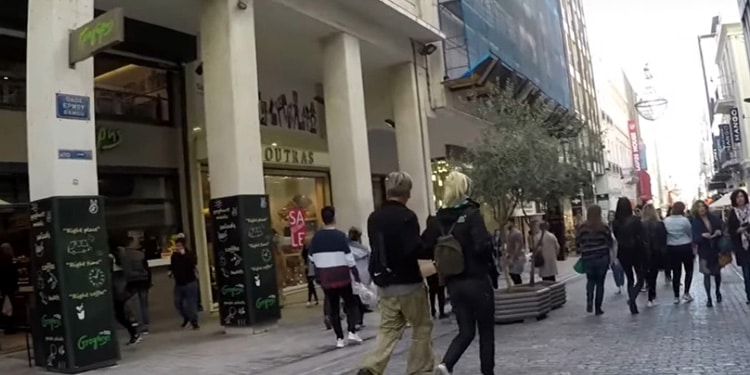 Today, the pedestrian Ermou street is undoubtedly the centre of trade and consumption in Athens. Maintaining its character for about two centuries, Ermou street is the way to find whatever you are looking for. The variety of shops, products and prices makes it particularly attractive during the discount and holiday seasons.

It has even been described as one of the most overcrowded roads in Europe. And one of the roads that tourists are looking for, as soon as they come to Greece.

An unknown detail about Ermou street

Ermou street has been twinned with Okurayama Street in Japan’s Kanagawa prefecture since 1988. This is an area with a population of almost 10 million!

The Experiential Christmas Village of Athens

What is Theodoros Kolokotronis pointing at, and what's curious about the stance of his horse?