Which big hospital of Athens used to be a pasture

Images that don't look like anything of today's city.

Athens has changed its face over the years and some neighborhoods are now unrecognizable. Where today we see apartment buildings and high-rise buildings, in the old days there were huge plots and even pastures. Likewise, this was the case with a part of Athens that today one of the largest hospitals of Greeece’s capital stands. We are talking about the NIMTShospital (Hospital of the Army Share Fund).

The pastures in Athens that became districts.

The image of sheep within the neighborhoods of the city was common. The streets were not well mnade even in very central parts of the city. Starting in the early 1900s, many areas formed pastures and especially around Lycabettos hill. Even today’s aristocratic Kolonaki district was once called “Katsikadika” and one could see many animals wandering there. The reconstruction of public buildings begun gradually, as well as that of private appartment buildings and the picture changed also gradually

At the same time, the first efforts to create a hospital for the needs of war veterans and their families were realized. All this happened exactly before the start of World War II. As early as 1853, the “Widows and Orphans Fund of the Army of the Constabulary and The Guard line” was established. The main objective was to provide financial assistance to the shares and shareholders, most of whom at the time lived in financial poverty without any substantial state aid.

The need to create a normal hospital

For the first time, in 1938, Ioannis Metaxas – who served among other things as Minister of Military Affairs – was proposed by Lieutenant General Elias Politis – who was commander of the Army Corps – and the Pharmacist Philippos Destounis, to create a hospital, which would have as its mission to provide medical services to the shareholders of the Army Share Fund. With the start of World War II however, the implementation of the idea of creating it in Athens was postponed.

The proposal became more relevant after the Greek Italian War of 1940. The situation is even worse with the return of the soldiers from the Albanian front as health care was poor, mainly due to the occupation. Things got difficult when the hospitals were requisitioned by the Italians initially and the Germans later. They were the ones who even removed the hospitalized war disabled.

On 5 November of 1941 the official publication of the law stated: “ANursing Institution is established in Athens which has all the medical specialties and scientific laboratories of a Hospital, subject to the direct control and supervision of the MTS (Army Share Fund) and the higher supervision of the Minister of National Defence, bearing the title of Nursing Foundation the Army Share Fund”. The location that was decided tfor the hospital to be erected was a pasture once. Looking at the few photos that are preserved, one can understand how different the picture was.

From pasture… to Hospital 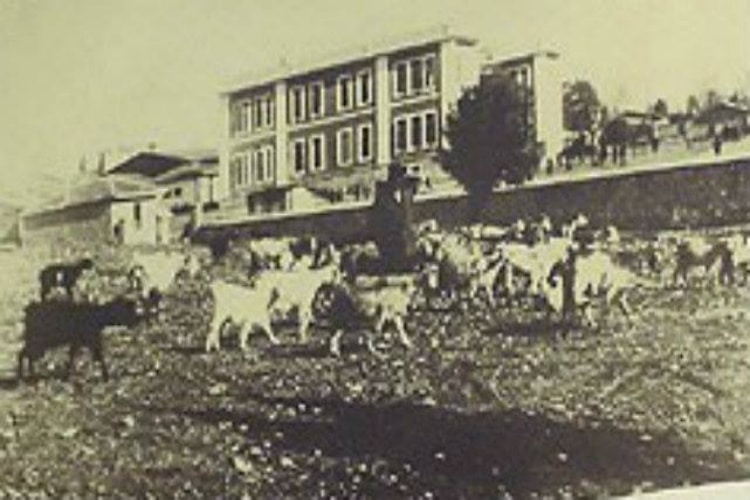 For the initial installation of the Institution, one of the buildings in the district of Disabled Officers near petraki monastery was granted by the State to the MTS, . This was housed within the area that stretched up to Dorylaiou Street and was known as “Military Shacks”. This building however was old and had the Hospital to be rehoused or erected anew. It was eventually decided to partially evacuate the old buildings and tear down the old hospital so that it would stop working.

The director and his associates received the premises, with rudimentary equipment, on November 27, 1941. With about 75 beds, in most of which disabled persons were hospitalize.. On 26 January 1942 the official opening of the NIMTS was carried out under the control and supervision of the MTS. Over the years the facilities changed (like other buildings in Athens) and began to modernize.

Where plots and pastures once where, the large hospital building now stands.

With information from: The history of military hospitals in modern Greece – Konstantinos Georgios

Who was the “little Lycabettus” in Athens and what happened to it?

Poros: four reasons for escape there

Rare photos from the Athens of the 1900s