Also known as The Rock of Venus

by Exploring Greece TV
in CYPRUS, Paphos
A A

Who doesn’t know the mythical birthplace of Aphrodite (Venus)? Cyprus can be proud of the famous beach from which she emerged. On the southwest coastline of Cyprus, on the route from Paphos to Limassol is one of the most famous coasts of the Great Isle, the so-called Petra of Romios or Aphrodite’s Rock (Venus’s Rock).

The beach and the rock

Following the southwest coastline of Cyprus, on the route from Paphos to Limassol is one of the most famous coasts of the Great Isle, the so-called Petra of Romios. It is an interesting geological formation of huge boulders. It is located along one of the most beautiful coasts of the island, on the southwest coast of Paphos Province. When you arrive and look at this image, you can’t help but be impressed by its natural beauty.

What the legend says

According to the legend, the ancient Greek goddess of love and beauty, Aphrodite (Venus) was born off the foam of the sea in this part of Cyprus. It is said that she emerged from the waves and a shell accompanied her to this beach. That’s why it’s also called the Rock of Aphrodite.

The Cyprus beach voted third best in the world

These impressive and giant boulders are also linked to another more recent legend. According to it, the Byzantine hero Digenis Akritas threw them in that position in order to keep the Saracen Arabs away. So this name the “Petra of Romios” (Romios means Greek) comes from this hero’s actions.

Cyprus and the famous beach

Cyprus has many unique beaches. However, some of them stand out, such as this one, for their history and what one can sees there. Among other things, it is said that during certain weather conditions the waves increase and as they break upon the rocks, they form a column of water. Which then dissolves into a pillar of foam. Using some imagination, you may think that it looks like an instantaneous, ephemeral and temporal human form. Another very popular myth is that, if one swims three times around the rock, one will acquire blessings, including eternal youth and beauty, good luck, fertility and true love. 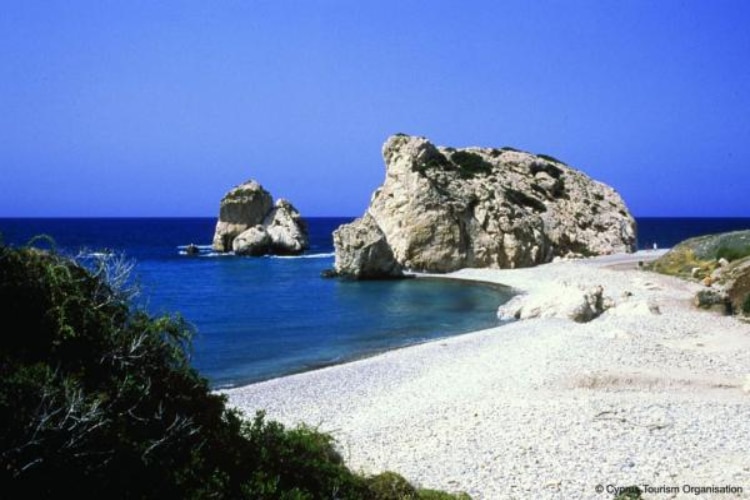 This area is connected to the Cultural Route of Aphrodite and it is definitely worth getting to know it personally when Cyprus becomes your next destination.

Cyprus: The historical and natural monument of Akamas

Cyprus: the fascinating Larnaca Salt Flats you can walk through