A retreat of special beauty

Large churches are awesome. Like churches built in the steepest of places. Or monasteries with a special history and architecture. All these comprise the image of Christianity in Greece from one end to the other. Among them, are the ones that stand out for their peculiarity. One of them is the only chapel in Greece without a roof. Lemnos is the island on which to find.

Panagia Kakaviotissa, is the only church without a roof in Greece

This picturesque, unique chapel is located on the top of a mountain in Lemnos. Its architecture makes it stand out. It is located under a cave and has no roof. Panagia Kakaviotissa is the only church in Greece without a roof. Its name is taken from the mountain Kakavos in which it is located, 4 km southeast of the port of Myrina.

The history of the small church that has a cave as its roof begins in 1300 when it was built. There, hermit monks chose to exercise their faith, while, to this day, it is a point of absolute silence and unique aesthetics. In 1305, the chapel came to the property of the monastery of Megisti Lavra, when monks from Agios Efstratios, who belonged to the monastery, settled in the chapel to protect themselves from the raids of Turks.

It was then that, under this rocky balcony the hermits built the small temple for the monks to perform the eucharist. Over the years the monks passed away and the last of them decided to leave Lemnos and go to Mount Athos. 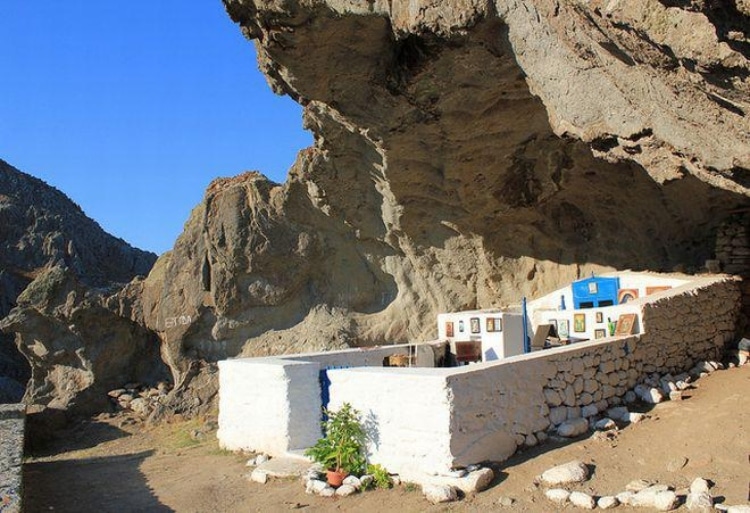 What the tradition says

Tradition has it that, before leaving for Mount Athos the last monk found a resident of Lemnos island from the Mumtzis family, who had his farm nearby and entrusted him with the painting of the Virgin Mary, called “The Rose that never withers away”. The monk asked the shepherd to place the picture in the temple of every “Holy Tuesday” (during the Holy Week before Easter) in order have a divine service. Then, according to popular legend, the hermit entered the sea, opened his robe, which became a boat and left for Mount Athos. Young monks did not come to the chapel, which remained as an attraction of the island. The chapel of the “Panagia of Kakaviotissa” is a retreat for those who want to isolate themselves and pray.

Access to the temple is via a path leading to the top of Mount Kakavos.

The chapel of Agios Paisios located in a tree

The Greek village that has its own distinct dialect