Sikinos: The small island of the Cyclades Islands that has a sunset as the one Santorini has

An island that encapsulates charm which is barren and also powerful

There are the large, famous and multi-photographed islands of the Cyclades Complex. And then there’s the little one from the Cyclades Islands, the island of Sikinos. Which, although small, proves to you why vacation in a place like this, can be unforgettable. From its beautiful Chora and the few but hospitable residents to a sunset that resembles that of Santorini. With a small difference. Much fewer people.

Sikinos, the little islands of the Cyclades Complex

Pinned between the tourist complexes of Ios and Folegandros, the small but picturesque Sikinus condenses into the few square kilometres that it has, a charm which is barren and yet powerful. And you realized all of that as you get off the boat at the port of Alopronoia and just a few meters away, people continue to swim undisturbed. An island so pristine and authentic with the Cycladic austerity and a lot of quietness. Sikinos is the island where you say “I’m on vacation” and I forget about everything. It is the little island of the Cyclades Complex that invites you to swim on free of organization beaches, explore old paths and taste good food in the villages.

Chora with a sunset that resembles that of Santorini

Apart from Alopronoia, the port that is, the only organized settlement of the island is Chora (the capital). It consists of two individual districts, the Castle and the Village, spread out on two facing mountainsides. From the left side, the Village is a wondrous puzzle of beautiful houses in labyrinthine roadsWhat steals the show, however, is the Castle, the fortified settlement of the 15th century located directly opposite. From Chora you will admire a unique sunset, similar to the one on Santorini island, but with much fewer people around you.

Walking now among houses with flower beds full of fiery geraniums and dense prickly pears, you can feel how much peace and happiness such a small island can give you. Its picturesqueness and its hospitable residents help a lot in this. In the alleys of Chora, you will only hear the wind whispering on the leaves of the vines. In the evening the island wakes up and people fill the small streets around the bars, cafes, taverns and shops. 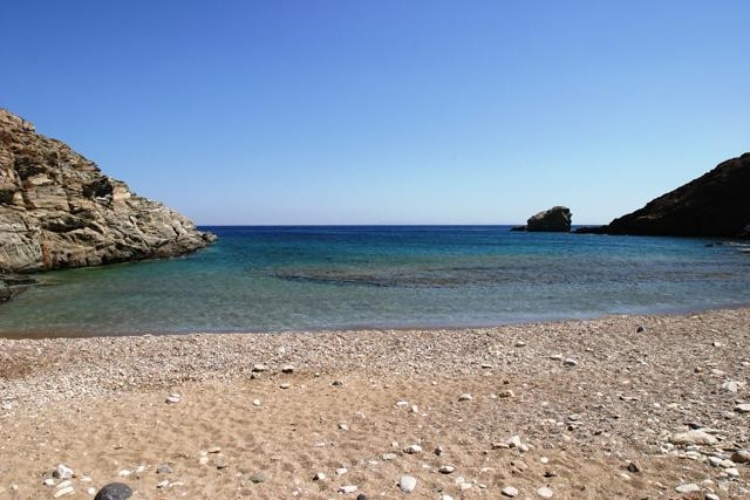 Gorges, Byzantine chapels, traces of ancient settlements and inaccessible beaches are the places you will find on the island among other things. The monastery of Chrysopigi is one of the things you should see as it stands out for its fortress-like constructionThe monastery was built in 1690 and was for nuns. Since this happened towards the end of the era of piracy, it is very likely that the castle existed before the monastery and served as a refuge for the inhabitants in the pirate raids.

The few but crystal clear beaches

Along with the crystal clear sandy beach of Alopronoia, the port of the island, two more beaches are accessible by road. These are Dialiskari and Agios Georgios. All 3 offer free umbrellas from the municipality. On the other beaches (Agios Panteleimonas, Satorinaeika, Maltas and Agios Giannis) are accessible via paths or by boat that departs from Alopronoia.

Discover Sikinos, a small island in the southern Cyclades Complex that will win you over with its natural beauties and human creations. In Sikinos, time and people have kept the traditional Cycladic colour unchanged.

Kythnos: The Cycladic island with the painted walls