Santorini is one of the top tourist destinations in the world. And of course, it’s no coincidence that The Caldera area perhaps is the most famous and one of the main reasons why the Island is worldwide known. The Caldera is the trademark of the island and if you will be there, it would be hard not to be seduced while you are watching the sunset disappear into the sea. A really dreamy place, like it’s out of a fairy tale

And of course the Caldera is famous for its breathtaking view towards the volcano and the endless blue of the Aegean Sea as the sun sets. Every year it is visited by a very large number of tourists from all over the world.

The Caldera and the unique natural environment around it

The steep volcanic slopes that surround the volcanic little islands of Old and New Kameni, around the impressive Caldera, create a rare natural environment.

According to some theories, it has been said that in the Caldera has been hidden the secret of lost Atlantis; The famous explorer Jacques Cousteau tried to explore this myth. However, the identification of the Lost Atlantis in the area of Santorini that sank has not been confirmed until now. 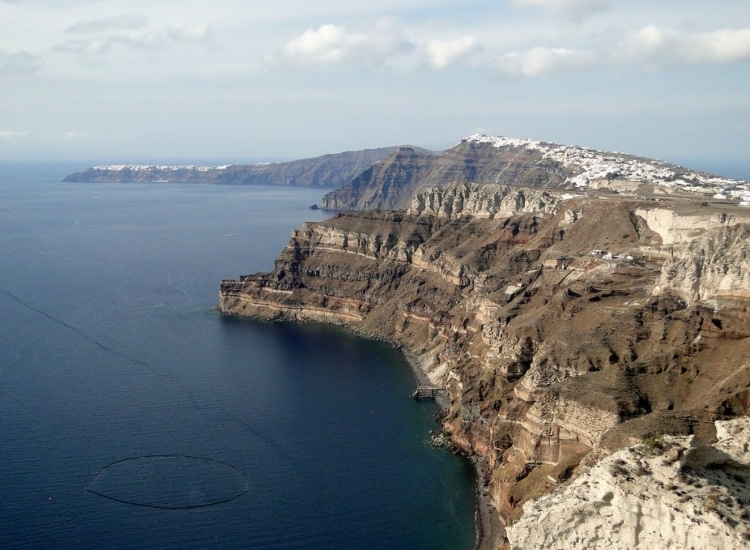 After the last volcanic eruption, almost all the settlements of Santorini were destroyed. The inhabitants managed to develop the island and tourism. Today when the ships arrive in Thira(capital), tourists can see on the outskirts of the Caldera the beautiful white houses that exist on the slopes of the island.

All over the island, there are settlements with beautiful buildings. Hotels and restaurants that literally hang on the edge of the settlement. They are some of the unique landscapes that magical Caldera has.

The panoramic view from the rooms is really rare and combined with the high-quality services and facilities that make Santorini an ideal choice for holidays and not only for the summer period.

One of the characteristic spots in the magical Caldera is the picturesque port of Ammoudi, below Oia. Its buildings used to be warehouses and from there, various products were loaded onto the boats. Many buildings were rebuilt during the reconstruction that took place after the earthquake of 1956.

The small pebbled beach in Ammoudi has a breathtaking view. It is accessible after a descent of just over 200 wide steps. The waters of this particular beach are crystal blue. But you have to be careful because they’re sharply deepening. If you choose to dive into the volcanic waters you will admire the unique image of the Caldera while it rises around you.

Santorini is the dream destination that you will definitely spend an idyllic holiday with a breathtaking view. It is certainly no coincidence that the sunset of the island is world known.

Diakofti: The dream port of Kythera

Milos: The recipe you should try on the island and cook for yourself

Amorgos Town: A trip to the endless blue