The steep chapel built by a castaway in the Cyclades Islands

The history of the church on the rocks of Naxos island

Greece is full of monasteries, churches and chapels each with its own unique history. Of great interest is how some churches and monasteries were created and founded. Like the story that a steep chapel in the Cyclades Islands has. This is the chapel of Agios Sozon.

One night several years ago, a merchant’s ship was wrecked in the maritime area off the coast south of NaxosThe merchandise he had on the boat was oil and wine. In his battle with the waves, he told God that if he would be saved, he would build a chapel of oil and wine in the area. Indeed, the adventure had a happy ending and he managed to get ashore to a rocky place on the coast.

Agios Sozon, the steep chapel built by a castaway in the Cyclades Islands

So, as the story says, he built a chapel and gave it the name Agios Sozon. It is an isolated area, even for today, which offers visitors an interesting hike, which starts from the beach of Agiassos. Agios Sozon is also called “Agios Sostis” and “Agios Sozos”, by the people and often the sailors invoke him to save them from the sea tempests, saying “Agie Sozon please save us”.

It is a popular saint to the sailors and islanders. Agios Sozon was born in Lycaonia, Asia Minor, during the times of Emperor Diocletian (284-305 AD). Before he embraced Christianity, he was called Tarasius. He was practising the profession of the shepherd. But when he heard the gospel, he was baptized as a Christian and took the name of Sozon. The meekness and sweetness of his character made him from a shepherd of sheep to a spiritual shepherd of men and a preacher of God’s word. 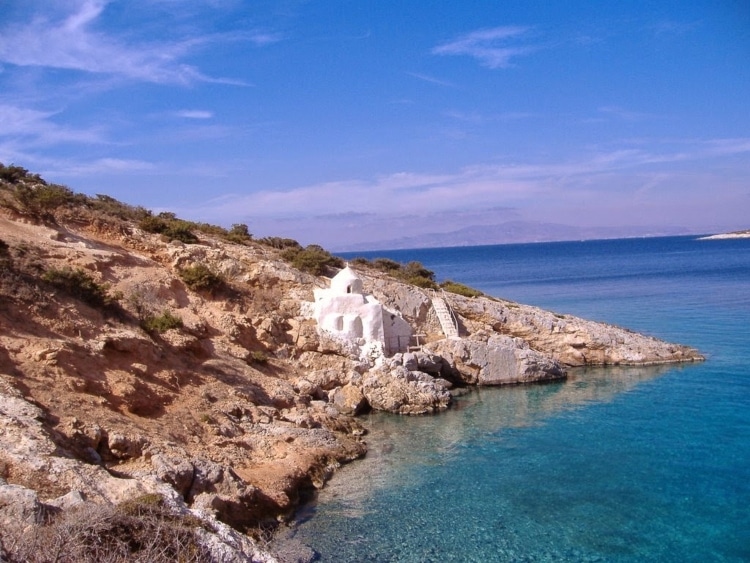 One day as he grazed his herd, he fell asleep. In his sleep, he saw a vision. A divine figure approached him, gave him courage and strengthened his faith. He also revealed to him that the place in which he resides will prove blessed and his inhabitants will find the salvation of their souls and glorify the Holy Trinity.

From the cove of Ag. Sozon, in the past, five stone anchors and samples of ceramics were found, such as a post-classical amphora, classical vessels, an integral part of a clay pipeline of late-Roman to Byzantine times.

This interesting story about the monastery in Naxos is not known to many and is one of the many concerning the churches and temples of Greece.

Crete: The fjord that “enchanted” Odysseus who stayed there for 7 years