Olympus: The village of Greece where women have the first say

Olympus offers a rare opportunity: One can live a completely different experience.

The village Olympus differs quite a bit from the thousands of villages that exist in Greece. This village of Karpathos island made CNN go and see what this is. There’s diversity there, that’s not easy to find in other parts of the country. It’s hard to find it, even in other countries. It is the village in Greece where women have the first say.

In the northern part of the island, the folk tradition is maintained in full until today. At an altitude of 310 meters, between two mountain peaks, the residents still speak the local dialect. Older women in Olympus move around in their traditional costumes. It’s like time has stopped…

This particular village has played a strategic role in the past. It was there that the inhabitants of the island ended up in order to escape the pirate raids. This, difficult to access, position offered security to the weak and frightened people who lived in the coastal settlements. The cut-off Olympus remained like that even a few years ago. Until the 1980s, travel was extremely difficult. The road was almost deterrent.

The mystical mountains of Greece that drove a British columnist crazy

The image of the village remains unchanged to this day. All of the above helped in maintaining a special tradition. In its tribute, CNN Travel describes Olympus as “a place that describes itself as a matriarchal.”

What’s is the case with Olympus 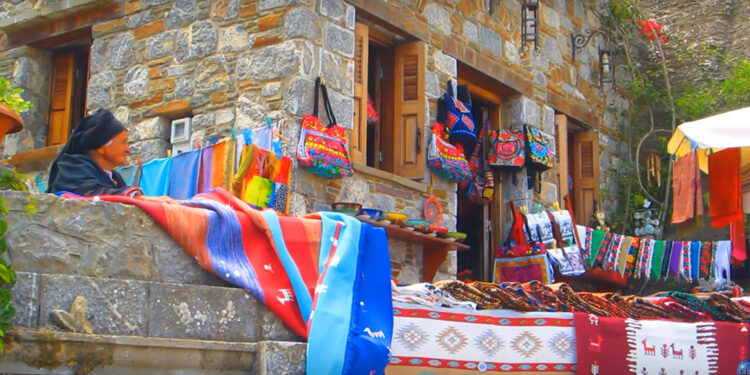 CNN Travel sent an envoy to Karpathos island to experience the uniqueness of the village. Journalist and writer Katie Shell landed in a corner of Greece that differs from the rest. She arrived at Olympus after passing through the centre of the island, named Avlona. The trip was designed so they could discover how the “matriarchal society” has been shaped.

Shell was clear in her research tribute. “Here women have the upper hand”, she wrote on the popular network. In Olympus society, roles are not the same. “There aren’t many places in the world that describe themselves as matriarchal… It seems like a rare opportunity to see something different from what we’re used to.’.

The CNN Travel correspondent walked into the village. Talked to its people. She lived like a local. The women in Olympus are dominant. They have a say in their homes. In the local community as well. Their point of view counts. Their role is active. Their voice has value. “The women of Olympus have some special power. They’re so responsible for their home. For their survival in this environment”she commented.

They keep their traditional costumes. They follow their religious customs. The modern element and amenities are absent from the village. The Olympus village does not wish to be a tourist destination. It doesn’t offer what the mass of tourists is looking for. It’s something else. It’s the place that offers us a rare opportunity. To experience something different from what we’re used to…

Athens: its place among the world's 500 most innovative cities