Zakynthos: The elegant city of the Ionian Sea

The city with its historical monuments and graphical houses

by Exploring Greece
in GREECE, Ionian Islands
A A

Zakynthos is in itself a fine and graphical island that is a typical example of the Ionian Islands. The city of Zakynthos is the capital of the island. Built at the foot of the hill of Bohali. It is a modern city that was rebuilt, after the earthquake of 1953. When you visit it you will notice that it is the elegant city of the Ionian. You will see the imposing traditional buildings with the arches, the arched windows. Even the graphical squares maintain the traditional style of the old town. There is also the main port of the island that connects Zakynthos with the Peloponnese. Also daily there are boats that go around the island. This is how you will experience the Shipwreck, the Blue Caves, Marathonisi and many other beauties of Zakynthos.

Solomos Square, in the center of Lombardos Avenue (Strata Marina), surrounds the neoclassical buildings of the National Bank, the Post-Byzantine Museum, the Town Hall, the Municipal Library and hosts the statue of our national poet Dionysios Solomos. Opposite the Statue of Liberty and the Column of the Fallen(soldiers who died for Freedom) is one of the most graphical spots of the city, a point of cultural and social events.

On the way to the interior of the city and through a graphical pedestrian street we find cafes, bars, and restaurants with intense traffic the whole year. Arriving in the traditional paved square of Agios Markos we find the neoclassical building of the Mausoleum Solomos- Kalvos (poets) and Eminent Zakynthians as well as the Catholic Church of St. Mark and the traditional clock. The Catholic Church follows the traditional model, which gives a magnificent aspect and charm.

From this point begins the21st of May street connected to Alexandros Roma where the commercial center of the city with the traditional Venetian arches is located. It has a wide variety of shops for all the needs of the local population and visitors. In the center of the city, in the location < of Bridge is the Prefecture of > Zakynthos where it hosts many public services.

In the town of Zakynthos there are many impressive churches with the most important that of Agios Dionysios, protector of the island, where the sanctuary of the relic is kept. The towering bell tower and the plethora of artworks, images, and murals inside the church will really impress you. It is also worth admiring the Temple of Faneromeni with its mesonic bell tower that was restored as it was first built with their chipped stone. Still, traditional churches are those of the Lady of Angels and St. Nicholas of Molos where they were built just as they were before the earthquake of 1953.

In addition, in the city of Zakynthos it is worth visiting the Museum of Possession and National Resistance housed in the Spiritual Center, the Folklore Museum located in Leonidas Zoi, the home of G. Xenopoulos(writer) where he lived his childhood. This place has been shaped and has now become a museum.

The panoramic view of Bohali 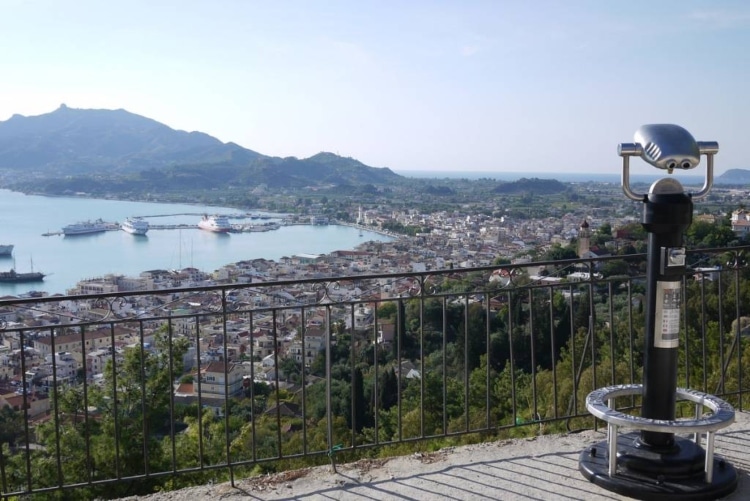 At a distance of only one kilometer is Bohali. It is worth admiring the panoramic view offered by the area since the city of Zakynthos and the magnificent waters of the Ionian Sea are spread out in front of it. In the graphical settlement of Bohali with its cobbled streets, flowered courtyards, and shops with traditional serenades you will love them. It is necessary to visit the Venetian castle which is built there and the pine forest inside it. Even before you climb to Bohali you must pass by the hill of Strani on which our national poet (Solomos) inspired the national anthem.

Lindos: The majestic Acropolis of Rhodes

Five summer destinations you only drive

They call the place 'Bad Sea' but it's anything but