Why did this famous Athenian statue stay in the workshop for 38 years?

Athens, in many places, looks like an open museum with the various statues reminiscent of moments from the past. Many of them have their own story sometimes more straightforward and other times more strange. Like the story of a well-known statue of Athens that stayed in the workshop for 38 years. Which is it? It is called The woodcutter.

The woodcutter and his story

When you walk downwards the Herod Attikos street, a little before you reach Vasilissis Olgas avenue, you will see a marble statue in a clearing of Zappeion Garden. It is the woodcutter, the most emblematic work of the sculptor Dimitris Filippotis. The statue is a representation of a naked man who breaks a log using hands and feet. Despite being considered by many connoisseurs, a masterpiece, the sculpture has gone through various adventures.

Filippotis began sculpting the woodcutter in his workshop in Patissia in 1871. Initially he made it in plaster and much later in marble. He considered it a milestone in his artistic creation and required from the state to finance its construction as a work equal to the ancient works of the classical period. So for many years in arow, every New Year’s Eve, he took out the plaster model outside his workshop in Patision avenue. What did he do next? He lit candles around it and protested that such a masterpiece remained unfinished because of the indifference of the state.

30 years passed until 1901, when the marble “woodcutter” was finished, after all these adventures, at the sculptor’s expenseEven then, and although it was put on display at an exhibition and its value was widely recognized, no one offered to buy it. Six years later and while the statue was still in the workshop, the National Gallery made a proposal. However, Filippotis rejected this proposal also. Until finally in 1908, the mayor of Athens Spyros Merkouris doubled the offer. Then the sculptor accepted, but not with great pleasure. 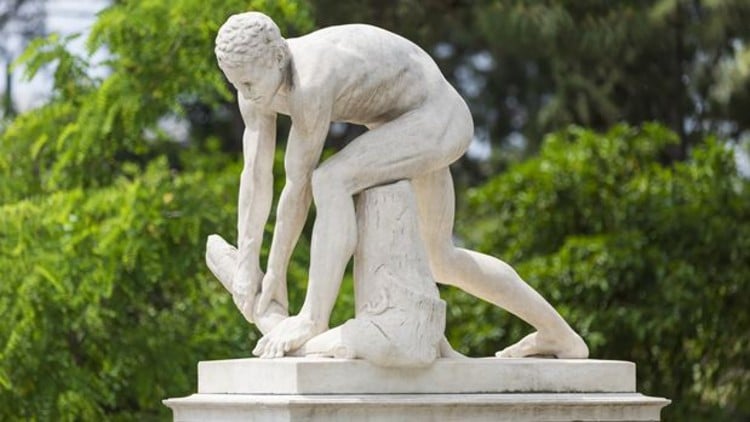 It had already been 38 years since he started sculpting it. A decision was made that the sculpture would be placed in Amalias avenue behind the Russian Church at the end of Filellinon street. Unfortunately, the lumberjack was met with more adventures. In 1910 someone went and threw a red dye in his face which was indelible with the chemical solutions of that time. Then, in 1912 the “woodcutter” was vandalized again when a stranger went and broke his genitals and has since been castrated. That is why a lot was rumored and even more was written in the press of the time.

However, despite the latter event, the “woodcutter” stayed in the same place for another fifty years. Finally in 1960 with the expansion works of Amalia Avenue, he was moved to Zappeion Garden where it is located to this day.

With information from: A drop of history, by Dimitris Kambourakis

The buried river of Athens that passed by the Acropolis

Ermou: this street was made for walkin'

What was Athens called before it acquired its present name.