Holidays on the volcano island of Greece – And no, it’s not Santorini

The diversity of Greece allows you to go for a vacation in the most amazing places, every year. Especially in summer, you can find yourself, either on blue beaches with trees that reach to the sea, or enjoy lunar landscapes that are the result of various processes of the natural environment. You can even go for a vacation on a volcano island and this time we’re not talking about Santorini. Nisyros is the rising volcano island that more and more people want to explore. Maybe you want to be one of them this year? Its simplicity and authenticity will surely steal your heart away.

Nisyros, holidays on the volcano island of Greece

Nisyros certainly does not belong to the cosmopolitan and much-advertised islands of Greece. It is, however, among those that stand out due to their character. After all, it is not usual to take a vacation on a volcano. If anything, the landscapes and beaches you will encounter are a feast for the eyes, to say the least. This hidden treasure of the Aegean Sea is in the same neighbourhood with Kos but one cannot say that they look alike.

Greek mythology says that the island was created by the Battle between Gods against Giants. That is the war between gods and giants, when Poseidon pursued the Giant Polyvotis, to Kos. Then, he decided to cut off part of it (Kos) and throw it over to his enemy by sinking him forever in the Aegean Sea.
Nisyros has its own character and leaves its imprint in the Aegean. What you will practically encounter if you go on holiday to Nisyros are traditional villages that remind you of the pure Greek summer. You’re going to light a candle in churches built on the rocks. You will swim in beautiful beaches and also in hot springs. Is there anything better?

What will also fascinate you is that, Nisyros, one of the most beautiful islands of the Dodecanese, is still untouched by the tourist traffic. That means you can experience what life is like on an island, firsthand.

Holidays on a crater 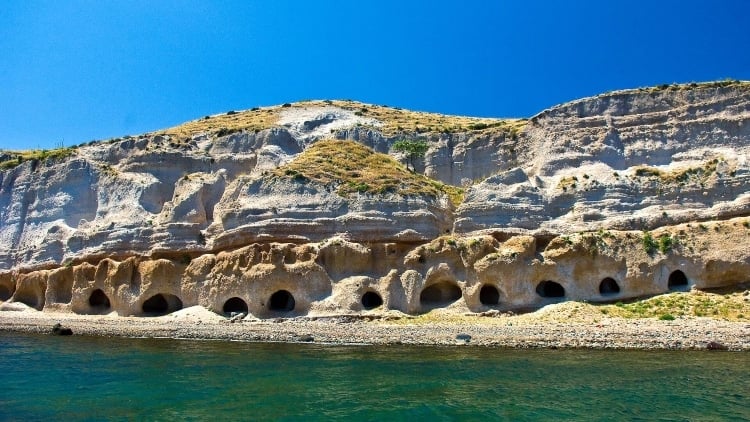 You will start your tour of the island from Mandraki which is essentially the port and its capital town. It is built amphitheatrically and offers a unique view of the blue sea. Small and picturesque alleys with squares will lead you to flowered courtyards and beautiful shops. You’re going to take a lot of pictures in the white houses that look like they’re painted because of the bougainvillaea. Just a mile away from Mandraki you will also find the famous springs of Loutra known for its sodium-chloride-sulfide waters with a maximum temperature of 46 degrees Celcius. Swimming there is in itself a special experience.

Nisyros and its beaches A small island may not have many beaches but they are all one better than the next. We highly recommend Pachia Ammos and Lefki Paralia which stay true to their name, because of their sand.Agios Savvas, Katsuni, Avlaki, Agia Irini and Chochlakia are also well known. The latter will impress you with its black crocs.

You can also try swimming in the neighbouring islands of Agios Antonios and Gyali by making a special one-day boat-trip.

The Volcanic Museum. You will not find a similar one in the whole of Greece or even in the eastern Mediterranean Sea. There, you will see how Nisyros was created and admire volcanic rocks with strange names and colours.

Tilos: What you don’t know about the quiet emerald of the Aegean Sea

Five Greek islands for a budget holiday this summer

The White Lake which is actually a beach