Plaka: How this iconic Athens district got its name

Walk in the neighborhood of dreams

It is undoubtedly one of the most beautiful and picturesque neighborhoods in Athens. A walk in Plaka relaxes you and makes you feel that it is in an old era there of a bygone Athens.

Plaka and its name

In the past Plaka was limited to the area that is today the monument of Lysikratos. It is the so-called, from the younger, “Diogenes Lantern”. Various versions of the story as to how Plaka got its name are circulating in Attica. True is that, historians and researchers have often come to “controversy” as to which origin of the name is the right one. The oldest and best known great Athenian chronographer, Dim. Kambouroglou argued that the name Plaka was due to a large marble slab. This was once found near the small church of Agios Georgios of Alexandria, which stood in the eastern slopes of the Acropolis, near Thespidos Street.

Kambouroglou did not say whether this plaque was embossed or insigned or in any way important. However, the great scholar of the history of Athens, Dimitrios Sisilianos, in his book “Old and New Athens”, considers this version unlikely or even insignificant. In other words, he does not consider that the marble-slab has attracted the attention of the inhabitants so much. In such a way, at least, that they named the whole Plaka district because of it.

There’s another story version for the name “Plaka.”. It’s the Albanian “Pliaka” which means old. Sicilian considers it more likely that the name came out, as a man called Psyllas had told him, from the Albanian “Pliaka”, which means old woman, or, generally speaking, old. He points out, however, that “the Albanian-speaking people around Athens call this district “Pliaka Athens”, that is, “old Athens”, which is why the name Plaka remained, when the Albanian word was Hellenized. “Certainly the origin of the name of Plaka remains questionable”. The architect and urban planner Kostas Biris, who had written many remarkable books about the city of Athens and the place names, argued that the word Plaka was Albanian and had come from the Albanian mercenaries, who stayed after the Orlovian revolution (an unsuccesful revolution against the Ottomans that took place in 1770) and were unemployed and the Turks housed them as settlers in the area of the neighborhood, which was around the monument of Lysikratos. 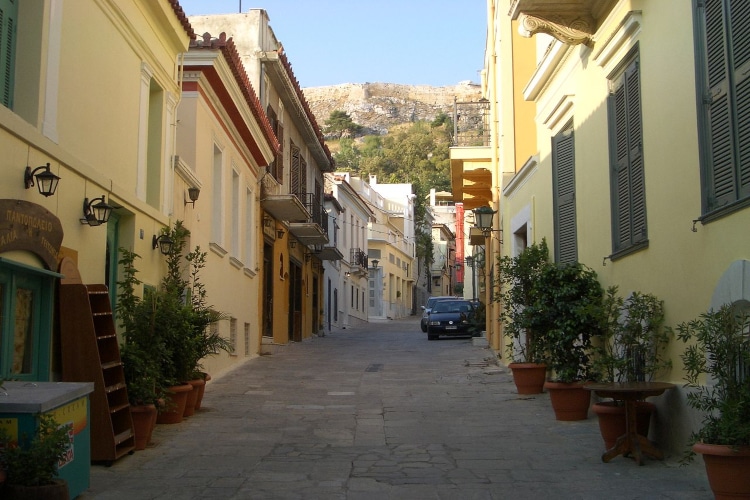 If you take a walk in Plaka today, you’ll think you’re in another space-time continuum, maybe even in another city. It’s of no coincidence that most people feel that it reminds them of an island. You definitely make an thinkable trip, to old Athens at that time when the houses were whitewashed and always freshly painted and had flowers on the balconies, and the colors and smells had authenticity.

The walk in Plaka always relaxes you and fills you with energy. Start on a Sunday and enjoy your relaxed walk. You will walk between ancient and modern sights. You will climb up to Anafiotika you will admire the picturesque and well-groomed houses. After you walk in the alleys and the cobblestones, you’ll sit on the stairs if it’s good for a “rakomello” (raki with honey). Whichever shop you choose to sit in, you’ll have a good time and enjoy a coffee or a glass of wine.

Nowadays that the image of Greece’s capital has changed, the district of Plaka remains the most “genuine” neighborhood of the city, a time-window to the Athens of the past. A walk is enough to unfold the history of the city from antiquity to our days, in front of us. If you haven’t done it so, then you should try it…

Attica: The unknown picturesque fishing village half an hour distance from Athens

Gone forever: the old neighborhood under the Acropolis

Cyprus: gastronomic stops you just have to make

Athens: the pleasantest walkabouts in the historic center