Athens: where was Agamon Square and why was it called that?

A story from the Old Athens

The old Athens has many stories to tell and some of them relate to the names of various streets and squares. Such a story concerns the Agamon Square which of course has now been renamed. This is Americis Square which, as it turns out, has changed its name not only once but twice. It is located on the west side of Patision Street and only two kilometers away from Omonia Square. The square has even given its name to the wider area that surrounds it.

The story begins when the Athenians went to this square to celebrate the 1st of May. It was considered, a holiday destination chosen by the inhabitants of the city to celebrate the first of May. At that time, of course, it was a green spot and open for children to play. There was no danger of fast-moving cars. Thus it naturally became a destination for a small excursion. That name, of course, didn’t last long.

The story behind the name Agamon

At the end of 1880, the square of Anthestiria in Athens was renamed to Agamon Square. But how did that name come about? There are two predominant beliefs about it. The first version wants the square to have been named after the fact that it was the place of secret love encounters. It is said that that is where not only the illegal couples went but also those who had nowhere else to house their love.

The second and most predominant version is a little more complicated but rather more plausible. It’s said that there was a coffee shop in that neighborhood. That’s where people used to hang out all the time, even… confirmed bachelors. Ther they had created a peculiar “movement against marriage” which bristled with irritation in 1887 when a publication of the “Ladies’ Journal” proposed the taxation on the bachelors. Under this proposal, a law should be passed that taxed all unmarried men aged over 30,because there were many single women who wanted to have a family and couldn’t find grooms.

It is characteristic that just before the bankruptcy of 1893 which also affected Athens, the state actually attempted for the first time to tax the bachelors. And not only them, but also those who frequented in brothels or similar hangouts. This suggestion was based on the justification that married people paid more taxes because they had families. 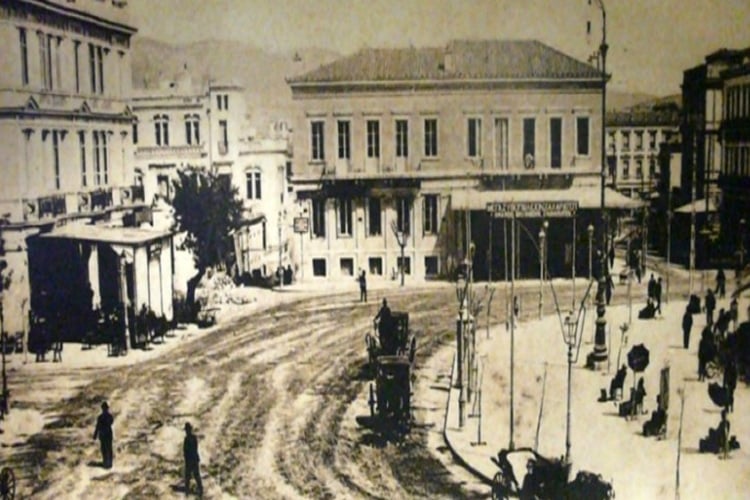 As for the group of bachelors who gave its name to Agamon Square there is another story that stands up to this day. It is said that a bachelor from the company, the furniture maker Georgios Perpinias, was married a young woman from Athens despite his commitment to the group. However, the marriage didn’t last long because his wife was cantakerous and he couldn’t stand it. So the story says, that she brought a cart, loaded all her belongings and sent it back to her family. Of course, then he returned to his friends and to the coffee shop in Agamon Square. This story was even published in the Ladies’ Journal.

Establishing it as Amerikis Square

The name Agamon Square finally came to an end. In 1927, it was renamed when, under the mayorship of Spyros Patsis, the then Municipal Council of the Municipality of Athens gave the square the name “Amerikis Square”. They wanted to honor the Philhellenism of the United States at the time. At that time, America was also considered a very distant and unapproachable continent.

* With information from the book “Athens, tracing the city with a guide to history and literature”, by Thanasis Yohalas and Tonyas Kafetzakis, publications ESTIA…