The modern suburban train serves thousands of people every day and covers long distances, outside city limits, in a short time. But it is not the first public means of transport that does such a thing in Attica. In Old Athens there was already what we can call the “first suburban train”. It was the railway that arrived from Athens to Kifissia and from there lead to Lavrion (A small town with great significance in antiquity times locate in the Southeast of Attica). The so-called “Beast.”

The Beast and its History

The so-called “Beast” was, as we said, the first suburban railway of Attica with several intermediate stations in Athens. It was a steam train made its last stop at Lavrio Square in Athens. In total, its journey to Kifissia lasted half an hour, which set a record at that time.. Naturally, this was considered a “revolution” in means of transportation at that time not only for Attica but also for the whole of Greece.

The “Beast” was born on Ash Monday of 1885, on February the 4th and its birth was celebrated all over Athens. As expected the Athenians rushed in to use the new train that would take them to the best holiday spot of the time, Kifissia district (a suburb north of Athens). The rush was so high that the company responsible for the line, stopped issuing tickets that day since 2 p.m.

It was steam-powered and constructed in Belgium. It could drag up to 12 cars that would hold up to 300 passengers and ran at a speed of 40 kilometers per hour. It was thus named because despite the difficulties at the time, it was able to transport the Athenians to the countryside. Its machine was “panting” and the wagons were making black fumes that further enhanced the look of the “beast”.

The new line of the Railway Company of Attica,Athens-Lavrio, “with branching in the way from Heraklion to Amarousion and Kifissia” had its starting point at the beginning of the 3rd of September Avenue – Lavrio Square and around it many cafes and restaurants were created. This was the second railway line in Athens. A few years earlier, the first one had been inaugurated, connecting Athens with Piraeus.

The route through Attica

If the Beast were to operate today, it would pass through apartment buildings. But its route was a heavenly spectacle at the time . The train passed through the trees and the passengers had the opportunity to admire the view of the mountains of the Attica basin. Even the train stops were extremely impressive. Kifissia’s stop wasamidst the trees and had lanterns that lit up in the dark, something rare for that time.

Since 1901 the company “Railways of Attica” undertook the upgrade of Kifissia line and some other points from which the train passed in Attica. This was in exchange for the exclusive operation of the railway line. Thus, the Kifisia Grove was created, which connected the station with Platanos Square. Many trees and ornamental flowers were planted in the grove and a pastry shop was established there, which was often visited by prime-minister Venizelos and the King himself. Until the ceasing of the operation of the “beast”, the Grove was the reference point of the Athenians especially for the summer afternoons.

The last trip of the Beast in Attica 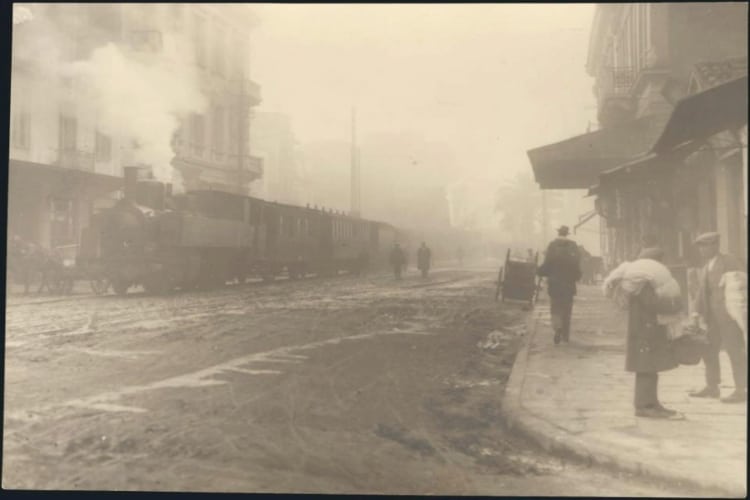 The Beast on the 3rd September Avenue (1925), Archive: Athens through the times

After the First World War the Beast of Kifissia in Attica looked old and the moment of the end came without further ado. One characteristic is that it completed the trip with great difficulty and several times even sparks protruded. The fumes were so thick that many passengers detrained with smudges on their faces. The tram and the cars were far better in comfort and speed and it seemed outdated.

It is even said that it had become so slow that the Athenians organized races in which they competed the wagons riding on their horses. The last trip of the first train of Kifissia took place on August 8, 1938. It was such a mood that had been cultivated at the time, that some people set up a feast in Kifissia to celebrate the last trip by ironically sticking even funeral papers to the light-columns! Of course, along with the railway line, a unique opportunity was missed for Athens to have a cheap and efficient public transport network.

What was the "little Lycabettus" of Athens, and what happened to it?