Athens 1950-1970. The nightlife of the capital of Greece is at its highest. Famous names of folk singing are at the height of their careers. Tsitsanis, Bellou, Chiotis and Kazantzidis fill the shops of Athens with people.The legendary night shops that wrote history for this new kind of entertainment they offered.

In exploringgreece.tv we gathered the most legendary nightclubs in which the old Athenians were entertained…

Center of Kalamatianos Dance in Tzitzifies.

The Center of Kalamatianos Dance (a popular folk dance from the city of Kalamata in Peloponnese) was one of the most legendary of the time and was located at the intersection of Tzitzifies district. The famous center was inaugurated by Markos Vamvakaris and Giannis Papaioannou. In the same area, the most famous nightclubs of the time were located for over twenty years. That’s where the most famous singers sang. However, on August 31, 1951, the owner of the center Vasilis Kalamatianos was murdered. Naturally, the nightclub temporarily was closed due to the bloody incident. It was later reopened by the owner of other night shops, named Vassilis Heilas. Responsible for this decision was Sotiria Bellou, who convinced him to make this business move.

The Cave of Paraskevas, in the Castella district of Piraeus. 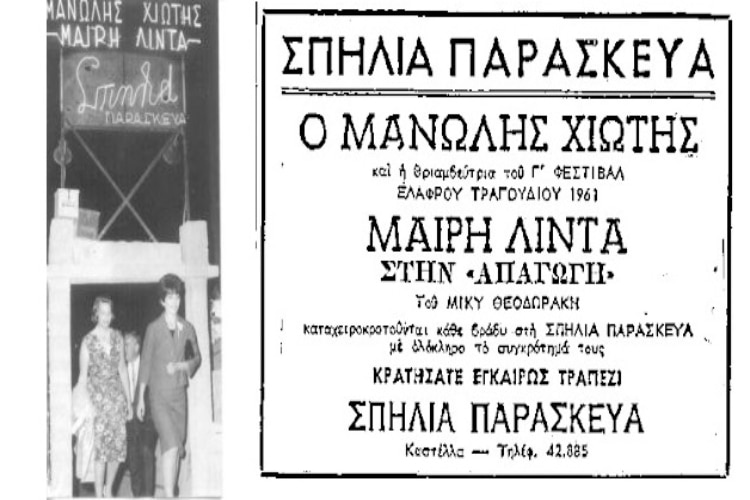 Undoubtedly the Cave of Paraskevas in the Castella district, was the most exceptional of all the night shops at the time. It was literally inside a cave! It was built on today’s beach Votsalakia otherwise called beach of Paraskevas. The cave is officially called “Siraggio” and is an underground passageway, rich in frescoes, built during prehistoric times by the people of Minyes (a prehistoric greek tribe). Its existence was discovered in 1897. During the 1920s, a social tavern was first installed in the cave. It was called the “Cave of Lalaounis”. A few years later and specifically in 1960, this tavern, was converted into a nightclub. The famous “Cave of Paraskevas”. Of course, the name was given to it by its new owner.

It was one of the most popular hangouts of the time. The nightclub was packed because Manolis Chiotis and Mary Linda where performing in it. And who would not discuss about their unique show. And who would not go to see them up close. So it didn’t take long for its peak moment to come. It was when there was a big party one night of the year 1961. Starring Aristotle Onassis, Maria Callas, Prince Renée of Monaco and the unique actress – the wife of Renée- Grace Kelly. Since then, its popularity in Athens, Piraeus and the whole of Attica has increased even further. The operation of the centre was interrupted in 1968 by the then mayor of Piraeus, Aristides Skilitsis.

Triana of Heilas, in Athens

Another one of the most legendary nightclubs of those decades. The Triana of Heilas was located at 170 Syngrou Avenue, in Agios Sostis of Kallithea district. It culminated from 1948 to 1967 after all the famous names of Athens’ nightlife passed through it. Triana was owned by the well-known nightclub entrepreneur, Vassilis Heilas. There was no famous singer who did not sing in it, and there was no Athenian citizen who did not go to see them. That’s where the dream team of the Greek folk singing gave a performance in it. From Kazantzidis and Giannis Papaioannou to Bithikotsis and Beba Blanche.

Jimmy the Fat-man, in Athens

On Acharnon Street at number 77, the well-known Jimmy the Fat-man, a famous tavern with live music, was operating. In this shop performed big names of the the post-war year scene, such as the infamous Sevash Chanum. The duo that made the nightclub very famous was Marika Ninou with Vasilis Tsitsanis who appeared there in 1949. Their coexistence was legendary. Unforgettable to those who saw them performe up close. Marika Ninou’s live performance that was published after her death, captures the climate of the night within the famous center, with the incredible profits for that time. Literally every famous singer performed there. The most famous names such as Tsitsanis, Kazantzidis, Bellou, Chiotis, Linda, Bithikotsis, Marinella and many others. Jimmy the Fat-man operated until the late 1960s.

Legendary cinemas in Athens that lasted the passing of time.

Palataki had a short run but it quickly gained a great reputation. It started operating in 1966 and only for four years, i.e. until 1970. However, because of the names it hosted, it managed to become one of the most famous centers of the time in Athens. There, on Syngrou Avenue, Giorgos Zabetas played his bouzouki and the dishes broke continually before his feet. His muse, Mandalena, was always next to him. How legendary this shop was, one can imagine considering that Dimitris Mitropanos performed there for the first time being only 20 years of age.

The shop in which Stelios Kazantzidis made his last live appearance. That’s where Yota Lydia started her career. Mandubala operated with great success in the 1960s on Alexandras Avenue. It took its name from kazantzidis’ sell-out, homonymous famous song written by by Eftichia Papagiannopoulou. The incidents that took place in this particular store were not a few. It was there once, when the henchman Panoliaskos threatened that he would throw a grenade if they didn’t give him a certain sum of money for the protection of the nightclub. In 1958, two famous henchmen of that era, threatened each other guns blazing.

Who does not know of of the Charama nightclub in Kaisariani district? Panos Gavalas inaugurated it post-war, when it had a different name and dominated the area of Firing Range. After the ’60s, it changed hands and was renamed to Charama. Its name was given to it by Papaioannou’s song “Before dawn (dawn stands for “charama” in greek)” and the successful Tsitsanis-Papaioannou partnership that had previously taken place in the Faliricon nightclub was repeated here as well. In Charama, Tsarouchis is dancing and Belou is at her apogee for years to come. In this night shop Vassilis Tsitsanis records a live pwerformance that becomes a double record by Omonia’s legendary record label “Gina Venus”.

Cyprus: The history of the famous Monastery of Panagia Araka

Cyprus: The amazing Rock of Episkopi

Metz: why this Athens district is called that